Amsterdam, 28 November 2017 – Global trade has experienced a broad upturn in 2017. Countries with an open economy stand to profit the most from this.

However, this stimulus may not persist in 2018, argues Atradius in its November Economic Outlook.

World economic output has surprised to the upside through 2017, supported by accommodative monetary policy, a modest energy price recovery, as well as stronger-than-expected growth in China and the eurozone. International trade especially has experienced a stronger-than-expected expansion in 2017 – accelerating from 1.4% y-o-y in 2016 to 3.8% as of September 2017. It has prompted upward revisions of trade forecasts around the globe.

The strong performance of world trade through 2017 is in part due to the recovering investment  growth in major markets – especially the US and China – boosting demand for imports. It can also be attributed to a reduction in political uncertainty.

“The strong acceleration in trade growth through 2017 is a welcome development that goes hand in hand with the stronger global economic outlook,” states Andreas Tesch, Atradius CMO. “Our data reflects th eimportance of international trade. Indeed, the majority of upward GDP forecast revisions have been in more manufacturing-oriented, export-intensive economies in Eastern Europe and Asia. In more domestic-oriented economies, like those in Latin America, developments were more stable.” 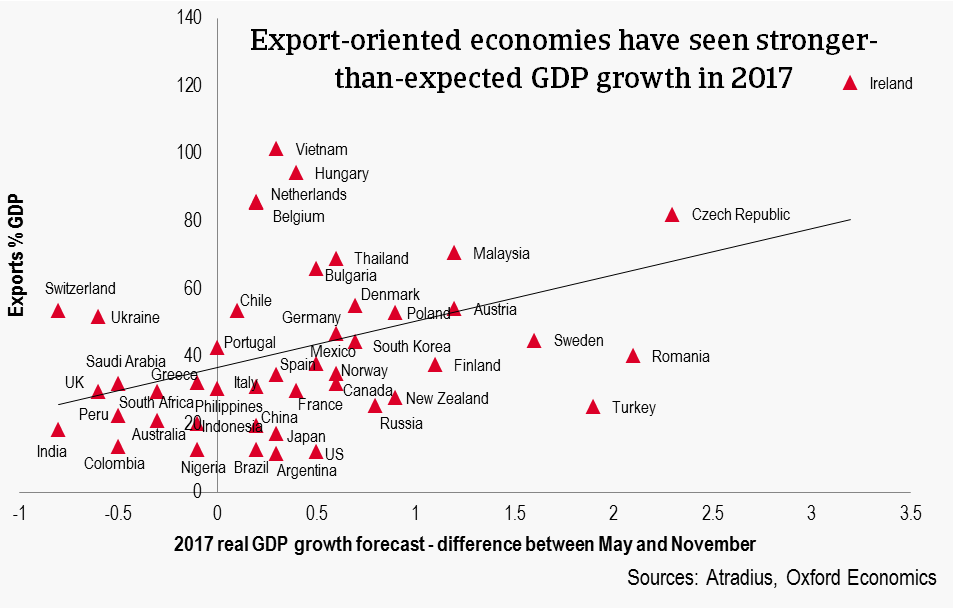 Atradius forecasts world trade growth of 5% in 2017. Forward-looking indicators point to a sustained expansion in 2018 but, with a higher base year, a deceleration to 3.5% is forecast.

While we expect trade to stay supportive for the global economy in 2018, we do not expect the same upward revisions as we saw in 2017. This is because the risks to global trade are still tilted to the downside. The ongoing turn inward by Chinese policymakers will continue to reduce demand in that market and weigh on intra-regional trade. Political uncertainty is also not off the table as trade disruptions from NAFTA and Brexit (re)negotiations could occur in 2018. US monetary tightening could also weigh on the outlook, making external financing more expensive for export-oriented emerging markets.

The Atradius Economic Outlook can be downloaded at www.atradius.com