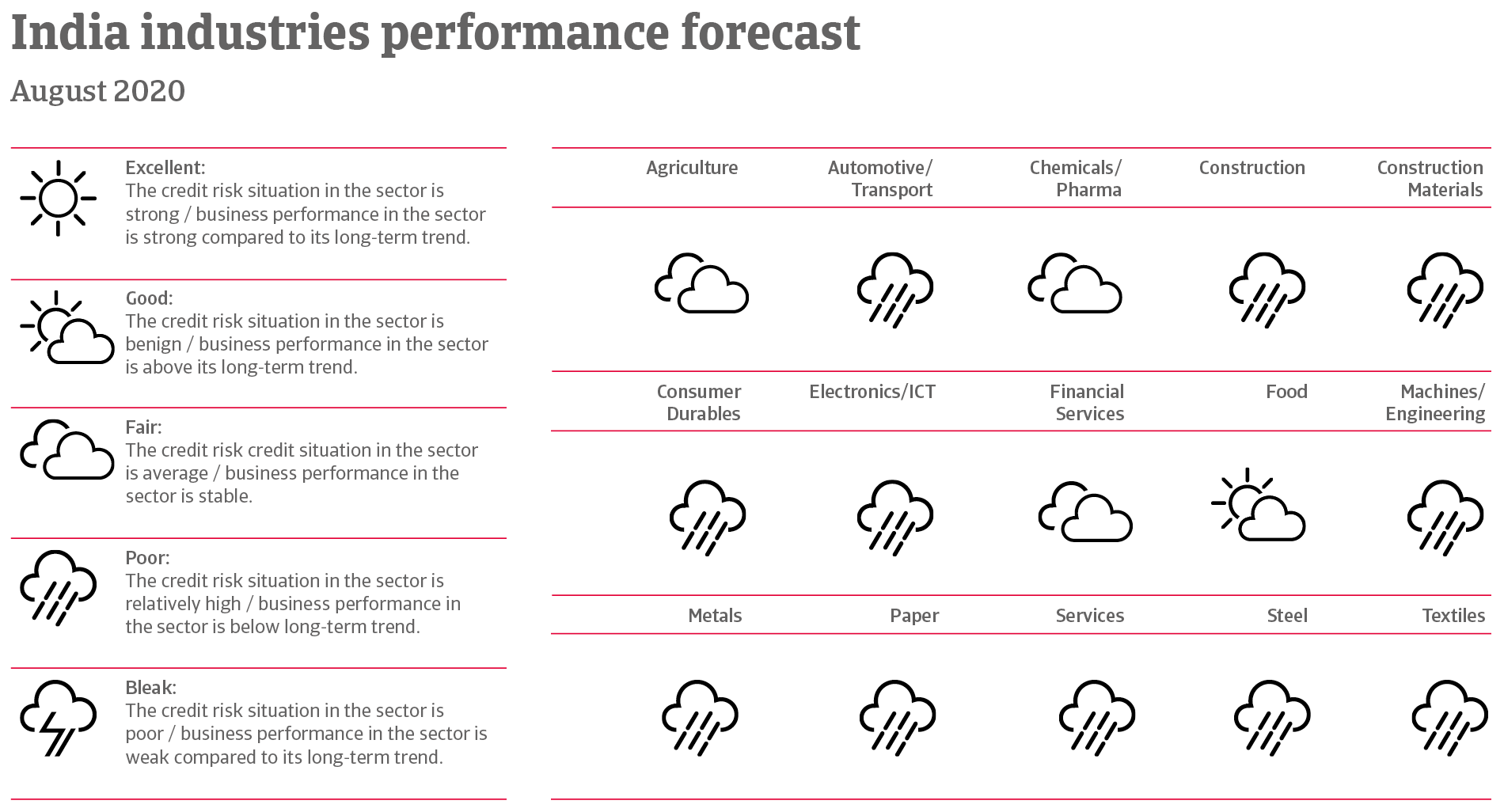 A sharp slowdown of economic growth, while woes in the financial sector could hamper a fast rebound

In 2019 India´s economy grew 4.9%, the lowest annual increase in more than six years. This was mainly due to a sharp credit slowdown that negatively affected domestic demand, while government consumption remained robust. In 2020 GDP is forecast to contract 5.7% due to the coronavirus pandemic. Above all, the government´s decision to impose a comprehensive lockdown as of end of March has had severe consequences for domestic demand. Among social distancing measures and travel bans unemployment has sharply increased, and household consumption growth is expected to contract by about 4% this year. The easing of lockdown measures has started in early June, but remains gradual for the time being, while the number of coronavirus cases is still increasing. Both investment and industrial production are forecast to contract, while exports are expected to decline by almost 13%.

Extended supply disruptions from China due to the coronavirus outbreak have hurt those Indian industries that are heavily dependent on imports, such as consumer durables, electronic manufacturing and pharmaceuticals (more than 65% of electronic components and almost 70% of pharmaceutical ingredients needed for further processing are imported from China). Apart from agriculture, food, and financial services, the business performance and credit risk situation of all main sectors has deteriorated. Business insolvencies are expected to increase by 75% year-on-year in 2020.

In order to sustain the economy, the Central Bank has sharply lowered the benchmark interest rate, by 75 basis points to 4.4 % in March, followed by a 40 basis point decrease to 4% in May. It has also taken additional non-rate measures to sustain the exchange rate and to provide liquidity in the market. Additional interest rate cuts are likely in the coming months. Inflation is expected to remain below the Central Banks´s medium-term inflation target of 4%, with upper and lower limits of 6% and 2% respectively.

In May the government announced a stimulus package worth USD 266 billion, which includes previous fiscal measures launched in March, and actions already taken by the Central Bank. A main focus of the package is on tax breaks for small businesses and incentives for domestic manufacturing, as well as providing cash to low-income households, and increased healthcare spending.

However, the room for further fiscal easing is limited, as the government’s revenue collection is still weak. The budget deficit already increased to 4.4% of GDP in 2019, and in 2020 a further increase to 7.6% of GDP is expected.

The increased risk aversion of global financial markets triggered a large capital outflow from emerging markets in Q1 of 2020. This has also led to increased depreciation pressure on the rupee, and the currency is expected to remain susceptible to further volatility in the coming months.

That said, the exchange rate risk is moderated by a significant improvement in India's external balances over the past couple of years. The current account deficit is expected to decrease below 1% of GDP in 2020, due to decreased import demand and lower oil prices. External debt remains at a sustainable level (22% of GDP expected in 2020) and the liquidity situation is good, with international reserves having increased to ten months of import cover in 2019. India has an excellent payment record, with no missed payments since 1970, providing it with good access to capital markets.

Ongoing woes in the financial sector could hamper a rebound

The Indian financial sector already had major issues prior to the coronavirus outbreak. The default of the large infrastructure financing and construction company IL&FS in autumn 2018 sparked fears about the health of other non-bank lenders and led to a squeeze in India’s corporate and consumer debt markets. Dampened consumer and corporate credit growth and a decrease in private sector infrastructure investment had a negative impact on economic growth in 2019.

Despite a decrease since 2018, there remains a high level of bad debt on the balance sheets of Indian banks, with non-performing loans accounting for almost 9% of total bank lending in 2019. Deteriorating asset quality and weak capital ratios remain issues. High corporate debt is a downside risk for the Indian economy, and further deterioration of the balance sheets of corporations and public banks cannot be ruled out. Ongoing issues in credit markets with tight lending conditions could prevent a comprehensive economic recovery after a lift of the lockdown measures.

It remains to be seen if the administration will take adequate measures to tackle the financial sector´s woes and debt issues. In the case of IL&FS the government took over the company and guaranteed payments after the default in order to avoid spill over effects. Additionally, several large state-owned banks were recapitalised.

A reform-minded government still in a strong position

With a majority in the lower house of parliament won in the 2019 general election, Prime Minister Narendra Modi’s Bharatiya Janata Party is expected to stay in power until the next general elections in 2024. Before the coronavirus outbreak, resolving the bad debt issue in the banking sector, further liberalisation of foreign investment restrictions in specific sectors and infrastructure projects were high on the agenda.

In early 2020 the government faced some public discontent over the weak economic performance, and the adoption of a controversial citizenship law in December 2019 increased tensions between Muslims and Hindus, leading to severe violent sectarian clashes in February. The coronavirus pandemic and subsequent lockdown measures have stopped this for the time being, but a longer-lasting economic downturn with many people falling into poverty could lead to increasing social tensions. Mainly the millions of daily wage earners and migrant workers employed in the large informal sector have been hit hard by the lockdown measures.