A recession in 2020 despite massive stimulus measures. 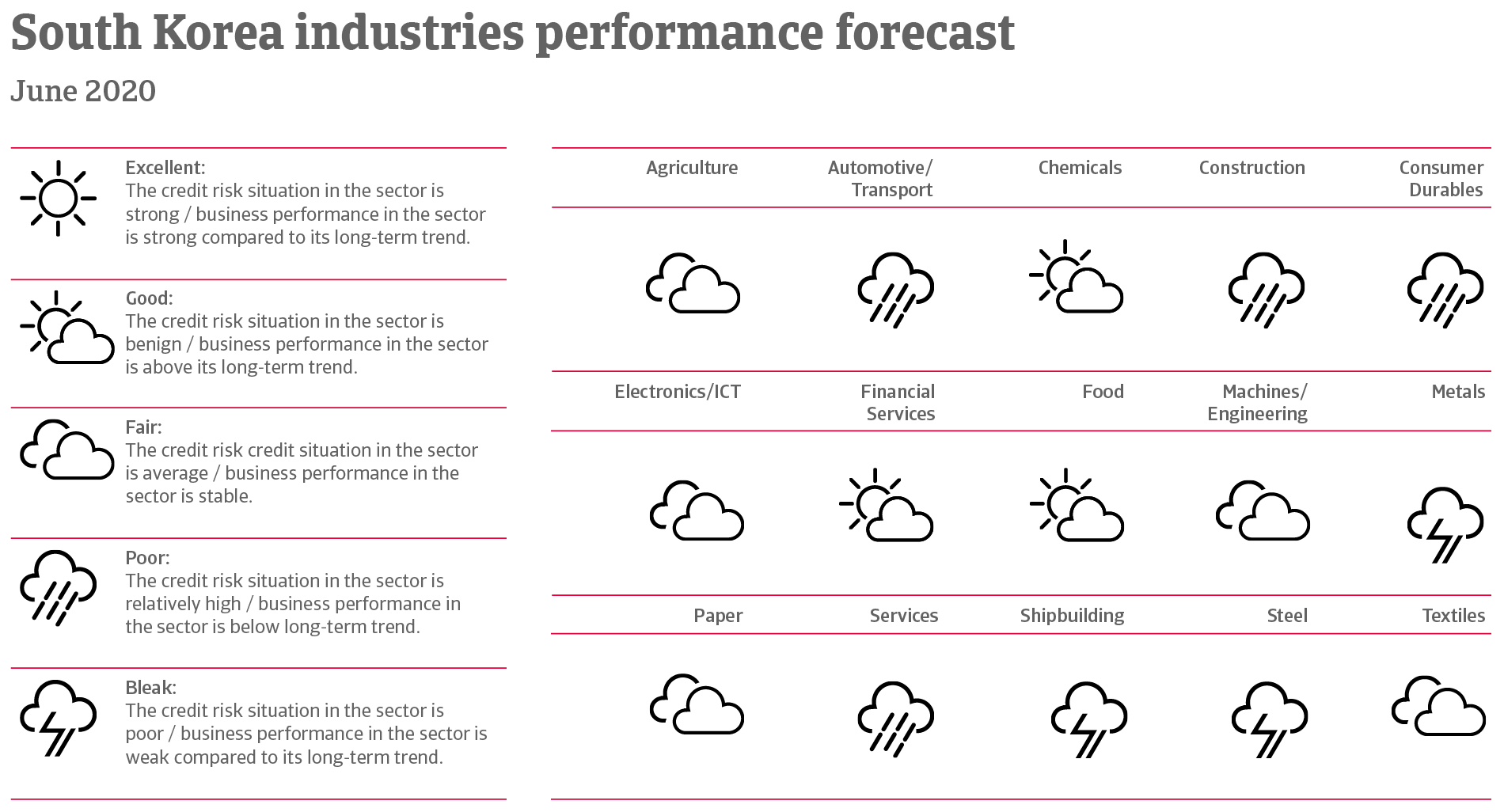 A recession on the horizon

In 2019 GDP growth decreased to 2%, mainly due to the global slowdown in trade, the Sino-US and Japan-South Korea trade disputes, less exports to China, and lower demand and decreased prices for semiconductors (the value of semiconductor exports decreased 25% year-on-year in 2019). While private consumption was modest, higher government spending sustained the economic expansion.

In 2020 the economy is facing a recession due to the impact of the coronavirus epidemic, which has disrupted regional supply chains and hit global economic growth. Delayed shipments of parts from China have hurt the Korean automotive and ICT sectors, with businesses operating below capacity. Ongoing deterioration of global demand and supply chain disruption have a major negative effect on industrial production and exports, expected to contract by 1.5% and 7.7% respectively in 2020.

Early June 2020 the South Korean government announced its third supplementary budget this year, worth USD 28.8 billion, raising total stimulus to about USD 220 billion (equivalent to about 14% of GDP). Measures include additional loans to struggling businesses, especially SMEs hit by deteriorating sales, additional spending to protect jobs and to support households, and increased investment in health care. Additionally, in March and May 2020 the central bank has cut interest rates, to a record low of 0.5% in order to support the economy.

A low public debt level (45% of GDP in 2019), low external debt (28% of GDP in 2019) and consistent current account surpluses provide the South Korean government with some flexibility in supporting the economy.

While the fiscal and monetary measures can dampen somehow the economic impact of the coronavirus pandemic, a massive global economic and financial markets deterioration would certainly trigger a protracted recession in South Korea. Structurally, the economy remains vulnerable to sharp downturns in China and an escalation of the Sino-US trade dispute. Domestically high household debt (about 95% of GDP) remain an issue. While it can be sustained at low interest rates, higher debt servicing costs could dampen consumer spending.

The slump in domestic demand has a severe impact on the credit risk situation and business performance of consumer durables, retail, services, and transport sectors. At the same time, construction businesses and related industries like steel suffer from the continued subdued performance of the residential construction segment (due to measures to rein in housing prices). A further deterioration of external demand could weigh on company profits of businesses in export-dependent sectors. Currently corporate insolvencies are expected to increase sharply in 2020, despite the comprehensive fiscal and monetary measures to support businesses.

Tensions on the Korean Peninsula have increased again

Tensions between South and North Korea have increased again in June 2020, culminating in the demolition of the joint liaison office by North Korea on its side of the border. Talks between the US and North Korea about its nuclear programme remain stalled, and the conflict over North Korea´s nuclear and missile program could flare up again. This, or even an armed escalation on the Korean Peninsula would have adverse effects on business and household confidence in South Korea and on foreign investors.