In 2021 Russia's economic rebound will be modest, and the prospect for higher growth rates in the coming years remains subdued. 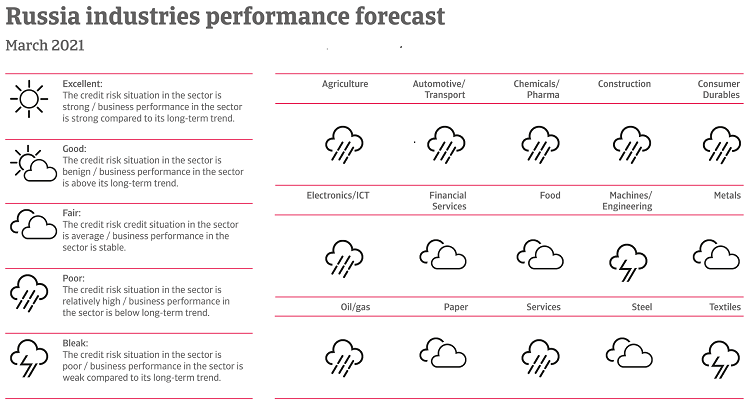 In a referendum held in June 2020, several constitutional reforms were approved, including an amendment that allows President Vladimir Putin to run again for presidency in 2024 and allows him to serve two more six-year terms. After opposition leader Alexei Navalny was sentenced to prison in early February 2021, street protests have flared up across the country, later being supressed by police.

Since the outbreak of the Ukraine crisis in early 2014, Russia’s relationship with the EU and US has deteriorated. Russia’s intervention in the civil war in Syria added another area of conflict to the already strained relationships. Moscow’s annexation of Crimea in March 2014, its tacit support of separatist forces in Eastern Ukraine and secret service activities in Europe triggered several rounds of sanctions from the EU and the US (such as frozen assets, travel bans on several individuals, financing limitations restricting access to EU/US capital markets and restrictions on the export of certain types of high-tech products to Russia).

Relations with the EU deteriorated further in early 2020 due to the Navalny issue, with mutual expulsions of diplomats and additional EU sanctions imposed on Russia. There is little prospect for an improvement in Russia’s relationship with the EU and the US in the short-term.

Only a modest economic rebound in 2021

In 2020 the Russian economy was hit by a combination of low oil prices and the negative effect of lockdown measures on domestic demand. However, as the lockdown measures in Russia were shorter and less severe than in other countries, the recession was relatively mild with a GDP contraction of 3.6%. Another reason for this is the fact that the service sector´s share in the Russian economy is relatively small.

The rebound in 2021 is expected to be modest, with a forecast 1.9% GDP growth. A comprehensive recovery of domestic demand is impacted by the fact that the government will largely roll back its fiscal stimulus. Decreasing social benefits and other subsidies to households could dampen the rebound of private consumption, which deteriorated by 6.5% in 2020. More issues include the second wave of the pandemic and the slow roll out of vaccinations so far. Real disposable incomes have decreased over the past couple of years, with another estimated decline of about 3% in 2020.

Exports are forecast to increase by about 3% in 2021, following a 4.8% contraction last year. After a steep decrease of the per barrel oil price in 2020, it has recovered over the past couple of months, and the US Energy Information Administration currently forecasts an average oil price of USD 53.20 per barrel in 2021. This will support the rebound of the Russian economy (oil and gas exports account for 55% of total exports and about 40% of federal government revenues). The 2021 oil price forecast would be above Russia’s fiscal break even level of USD 45, required for long-term fiscal sustainability. However, at the same time, Russia remains committed to production cuts under the OPEC+ deal, keeping export earnings from being oil constrained. At least the initial agreement between OPEC and Russia to cut production by 9.7 barrels a day from April 2020 was replaced by a lower cut of 7.7 barrels a day in July.

The Russian rouble depreciated 10.5% against the USD in 2020, driven by strong oil price volatility, investors’ risk aversion towards emerging markets and political instability in Russia’s neighbourhood (e.g. political turmoil in Belarus and the armed conflict between Armenia and Azerbaijan). The Central Bank and Ministry of Finance's foreign-currency sales have supported the currency so far, and the recent increase in oil price is also providing support. The downside risk to the rouble in 2021 is ongoing geopolitical tensions. The Central Bank lowered the interest rate several times in H1 of 2020 but kept it at 4.25% since August 2020. Inflation is expected to increase from 3.4% in 2020 to 5% in 2021, above the Central Bank 4% target.

The government continues to pursue a prudent fiscal policy. After annual surpluses in 2018 and 2019, the fiscal balance turned into a 5% deficit in 2020, mainly due to low oil prices and pandemic-related fiscal measures (e.g. social benefits for households and financial support for companies), which amounted to 3.5% of GDP. Government debt increased from 14% of GDP in 2019 to 20%, which is still low. However, it is expected that Moscow will largely reduce its fiscal stimulus in 2021, as it prioritizes preserving fiscal buffers as a safeguard against external shocks (e.g. additional sanctions imposed by the EU).

Foreign debt is forecast to increase from 26% of GDP in 2019 to 33% of GDP in 2021, but it is expected to decrease again in the coming years. Projections show that external debt is rather robust against macro-economic shocks. While foreign exchange reserves decreased in 2020, they remain high at 22 months of import cover in 2021.

The Russian business climate is mired in uncertainty regarding property rights, a weak transport infrastructure and a lack of competition in goods and services markets. There is an underlying deterrent for investments, badly needed to modernise the energy sector and to help diversify the economy. Even before the start of the Ukrainian crisis, the investment level was too low, and foreign direct investment too limited, partly due to an unfriendly business climate and the firm grip of the state on large parts of the economy. This is now exacerbated by the international sanctions imposed by the EU and the US that aim to prevent technology transfers and financing to Russian firms, especially in the energy and military sectors.

As with businesses throughout the world, also industry in Eastern Europe has experienced a pandemic battering. The region, however, faces 2021 bruised but hopeful.

As several vaccines have been approved and are being rolled out, we expect the global economy to rebound in 2021