Australia: a sharp increase in DSO

In 2018, respondents in Australia reported a steep increase in DSO and the need for more time to convert B2B invoices into cash.

In 2018, respondents in Australia reported a steep increase in DSO and the need for more time to convert B2B invoices into cash.

Respondents in Australia are trading on credit because this is the way businesses in their industries operate and so that they can expand their activities domestically and internationally. In 2018, respondents reported a steep increase in DSO and the need for more time to convert B2B invoices into cash. Bankruptcy and the inability to locate the customer are the most frequently mentioned reasons for writing off B2B receivables as uncollectable. 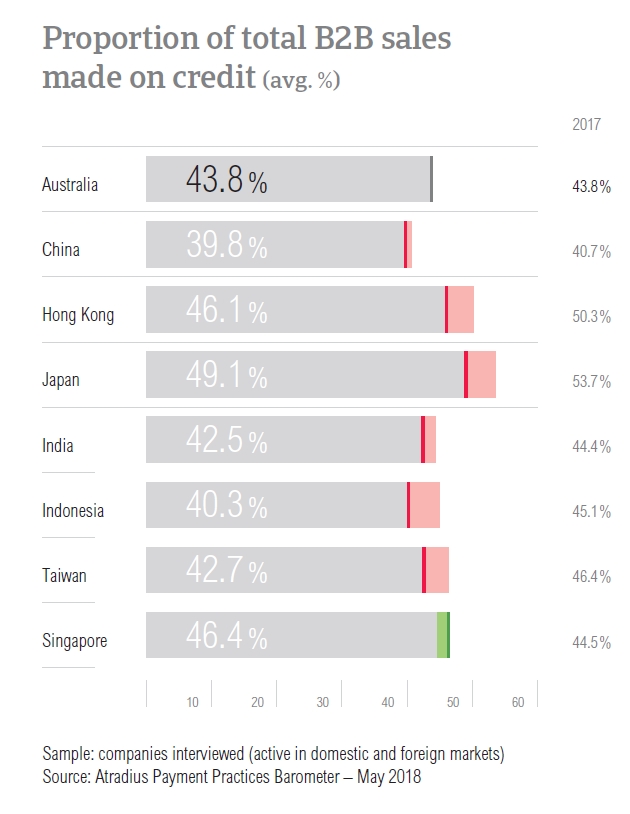 The average proportion of sales made on credit in Australia remained unchanged at 43.8%. Sales on credit terms occur significantly more often with domestic B2B customers than with B2B customers abroad (50.0% versus 37.5%).

Australian respondents said that they are granting trade credit to their domestic and foreign B2B customers because this is the usual business practice. Selling on credit is also seen as a way to ensure cash flow and expand businesses domestically and internationally.

We trade on credit because that is the way the industry operates.

There was no consensus on the reason why Australian respondents would not offer trade credit to their domestic B2B customers. 17.4% of respondents mentioned that a lack of information on the customer’s business or payment performance would determine this decision. In respect to foreign B2B customers, the most Australian respondents said that they would not grant credit terms if there’s high currency risk (mentioned by 39.3%) and high economic or political risk in the customer’s country (35.7%).

We are granting trade credit to foreign B2B companies to expand internationally.

A steep increase in DSO 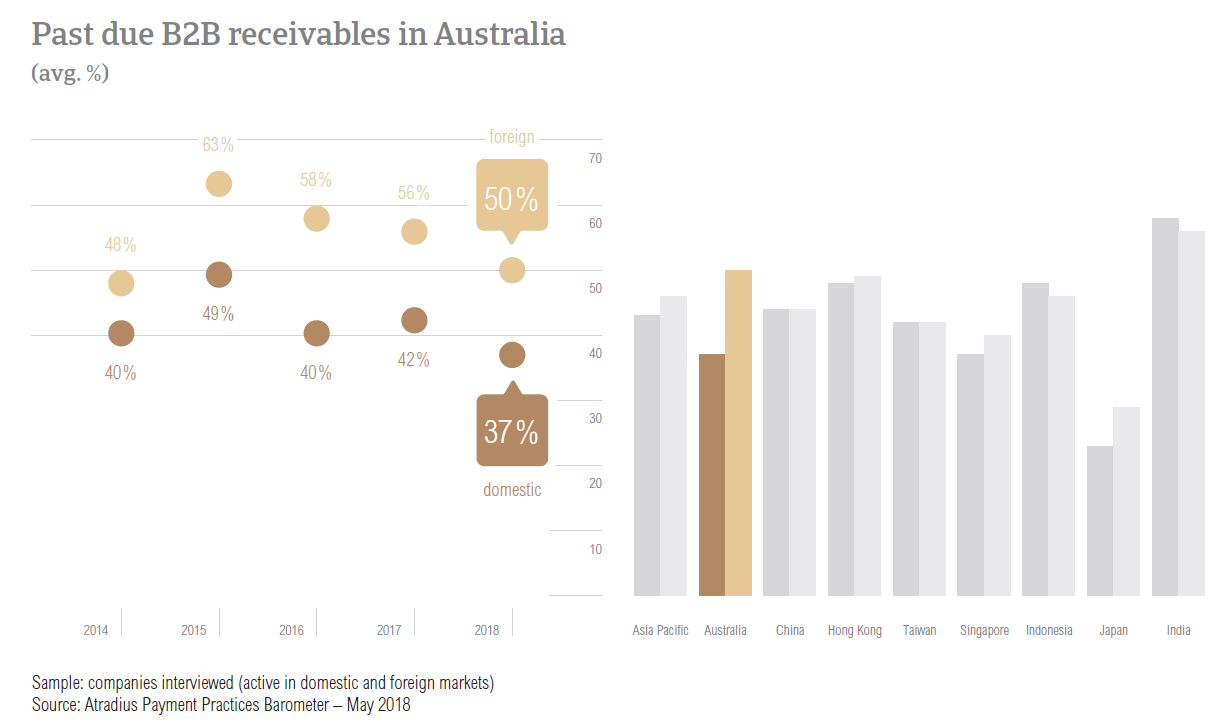 Respondents in Australia reported a steep increase in the average Days Sales Outstanding (DSO) figure in 2018. This stands at 34 days and is 12 days longer than in 2017. Asked about the coming 12 months, most respondents (66.3%) do not expect any changes in their company's DSO. Of those who foresee changes, 13.6% expect a slight decrease and 12.0% a slight increase. 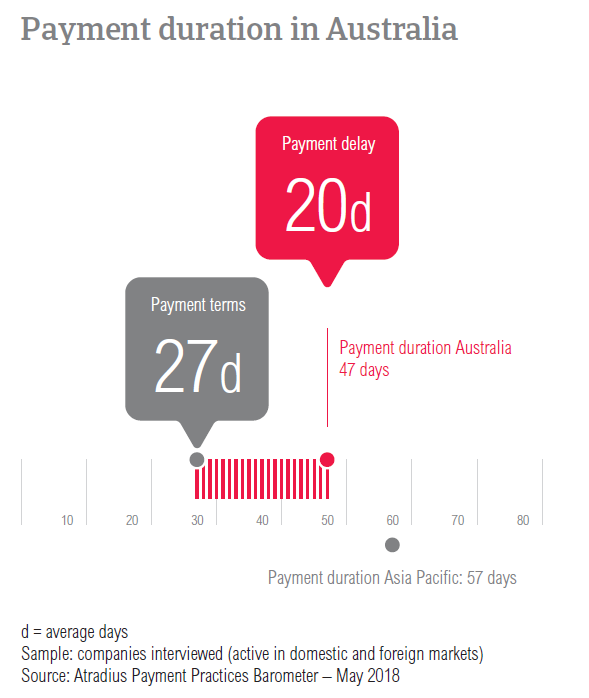 In 2018, payment delays by B2B customers in Australia are shorter. Domestic B2B customers delayed payments, on average by 16 days – five days less than last year. Payment delays by foreign B2B customers decreased even more – by seven days – to 25 days, on average. Based on these changes and the ones mentioned in regards to payment terms, the payment duration in Australia increased to 47 days. This is two days longer than in 2017 but significantly below the regional average of 57 days.

Payment delays by B2B customers seem to occur mostly because of insufficient availability of funds and the buyers using outstanding invoices as a form of financing (stated by 41% of Australian respondents). Insufficient availability of funds was also the main reason for payment delays by foreign B2B customers (mentioned by 32.3% of respondents). Disputes over the quality of goods delivered and services provided was another frequently mentioned reason for foreign payment delays; this was cited by 30.7% of respondents.

Among the Asia Pacific countries surveyed, Australia had the highest percentage of respondents (48.7%) who stated that payment delays did not have a significant impact on their businesses. Of those who have experienced an impact, 16.0% said that they needed to take specific measures to correct cash flow and 15.0% that payment delays led to revenue loss.

Extensive use of e-invoicing but disagreement on its effect 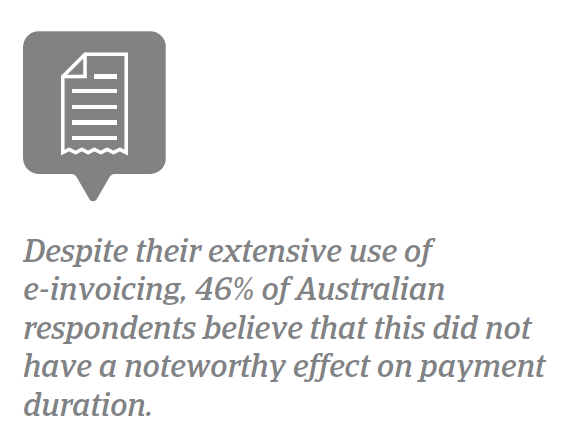 Despite the extensive use of e-invoicing, there seems to be a difference in opinion whether it leads to quicker payments. 51.7% believe so and 46.1% said that e-invoicing did not have a noteworthy effect on payment duration. Only 2.1% of respondents reported that e-invoicing led to slower payments.

53.6% of Australian respondents do not expect turnover losses due to global protectionist measures

53.6% of respondents in Australia said that they do not expect the developments at global level to have an effect on their company’s turnover in the coming 12 months. Among the Asia Pacific countries surveyed, Australia had the highest percentage of respondents stating this.

Of the respondents who believe that their companies might be affected, 18.5% mentioned that they expect a loss in turnover of up to 10% and 10.4% expect that the impact will likely range between 20% and 30%. In contrast, 6% of respondents in Australia – probably focusing primarily on domestic B2B sales – expect to be positively impacted by protectionism around the globe. 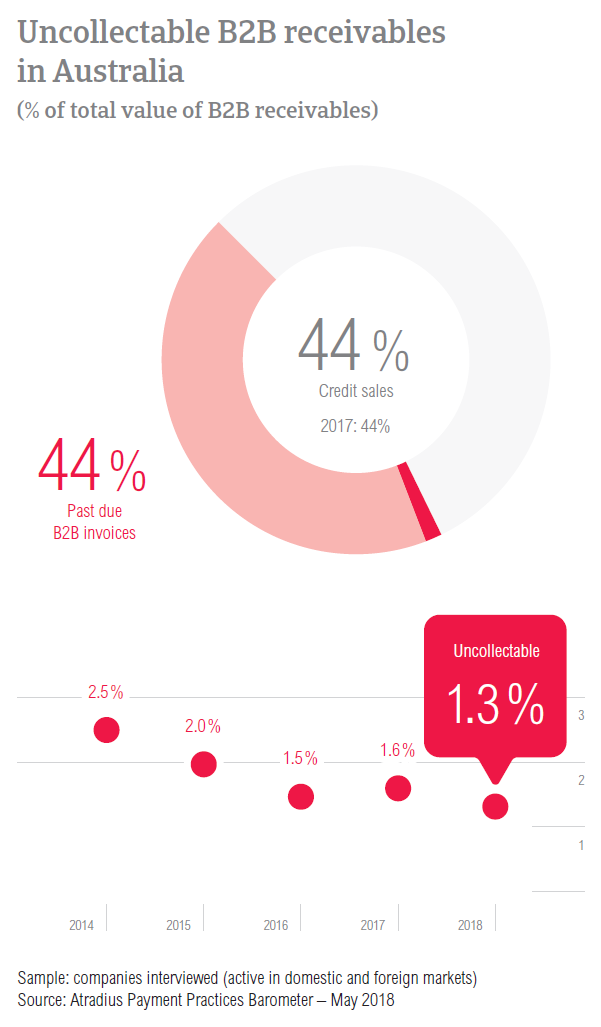 Uncollectable receivables originated most often from B2B customers in construction, consumer durables, business services and services. The customer going bankrupt or out of business was the main reason for write-offs in Australia (mentioned by 46.3% of respondents) and in Asia Pacific overall. The second most frequently reported reason for write-offs is the inability to locate the customer, stated by 31.7% of respondents in the country.

Consumer durables – a problematic sector in 2018

Most respondents in Australia (54%) do not expect to see payment behaviour changes by their B2B customers in consumer durables and chemicals over the coming 12 months. Should changes occur, respondents in the country are optimistic that these would be for the better.

In 2018 sales are expected to be affected by slower household spending growth, triggered by a weaker housing market and subdued growth in household income.