In line with the survey average, 91.4% of respondents in Brazil (95.0% in 2015) reported late payment of invoices from B2B customers over the last 12 months. 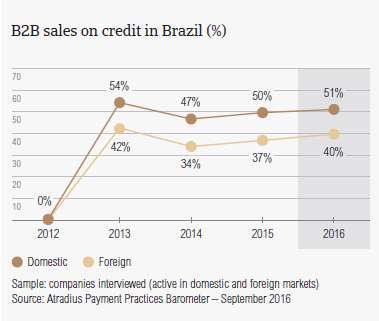 Brazil’s economy contracted 3.8% last year, and is forecast to continue contracting in 2016 before posting still weak growth in 2017. Domestic demand is severely depressed, while export orders are rising at their fastest pace in more than six years, thus easing economic contraction. Nevertheless, credit risks in Brazil are growing, and insolvencies are forecast to significantly increase this year, as financial conditions in the market tighten.  These features are clearly reflected in the survey findings about both the payment behaviour trend in the country and the way businesses protect themselves against payment risks arising from B2B trade on credit domestically and abroad. 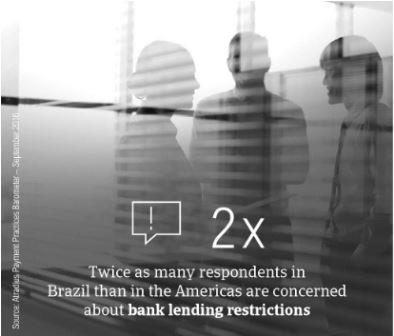 It is apparent from the responses given by suppliers interviewed in Brazil that they are much more inclined to sell on a cash basis than on credit terms to their B2B customers. On average, 55.0% of the B2B sales value in Brazil was reported to be on cash terms (57.0% last year) and 45.0% on credit terms (43.0% in 2015). This conservative approach to offering credit terms to B2B customers is in line with observations across all of the countries surveyed in the Americas. This would suggest that respondents in Brazil, like their peers in the region, prioritize selling on a cash basis to B2B customers to protect their business’ cash flow and profits against payment default. This although selling on cash may lead to losing sales and market share to competitors offering credit terms.

Of the countries surveyed in the Americas, Brazil appears to be the country most inclined to use trade credit in B2B transactions with domestic customers. An average of 50.9% of the total value of domestic B2B sales was made on credit (consistent with last year). This relatively heavy use of trade credit on the home market may be due to the tight bank lending conditions in the country, which tend to enhance the role of trade credit as an alternative source of corporate funding. Credit-based sales amount to 39.5% (36.5% one year ago) of the total value of respondents’ B2B sales abroad. This increase in the volume of export credit-based sales may reflect the on-going growth of the country’s export flows consequent to the depreciation of the Brazilian currency.

In line with the survey average, 91.4% of respondents in Brazil (95.0% one year ago) reported late payment of invoices from B2B customers over the last 12 months. This resulted in an average of 43.3% of the total value of B2B receivables remaining outstanding past the due date(no significant change from last year). This compares to a 47.1% survey average.

Late payment of invoices was reported to occur more frequently with domestic (46.4% of the total value of domestic B2B invoices was past due, up from 43.8% last year) than with foreign customers (40.2%, down from 44.2% last year). The further increase in domestic insolvencies that Brazil is forecast to see this year is attributable to both the tightening of financial conditions in the market and to the contraction of the economy. 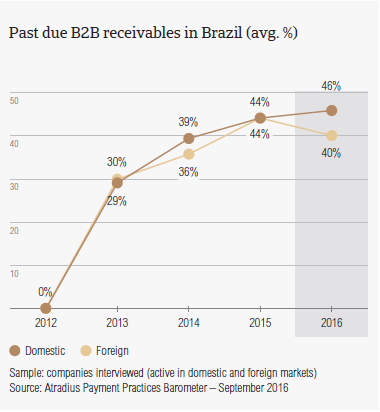 Late payment of B2B invoices is reflected in the Days Sales Outstanding (DSO) figure recorded by respondents in Brazil. This averages 30 days (compared to a 35 days survey average) and has remained reasonably stable over the past year. The significant worsening in domestic payment practices seen in Brazil is reflected in the concern expressed by many of the local respondents (47.3%) about a significant deterioration in their DSO over the next 12 months. This compares to 23.4% of respondents expecting an improvement, and to 28.7% anticipating no change in this indicator. 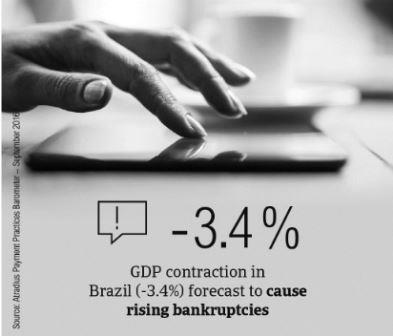 Most of the respondents in Brazil (18.2% compared to a 16.0% survey average) appear to be concerned about containment of costs this year. Consistent with the current economic and financial conditions of the Brazil market, respondents are of the opinion that costs will most likely stem from the collection of outstanding invoices (13.6% of respondents compared to a 11.6% survey average), as well as from bank lending restrictions in the home market. It is worth noting that, by percentage, this appears to be a reason for concern for nearly twice as many respondents in Brazil (13.2%) than in the Americas (7.7%).

B2B customers of respondents in Brazil are given an average of 31 days from the invoice date to pay invoices (survey average: 27 days). 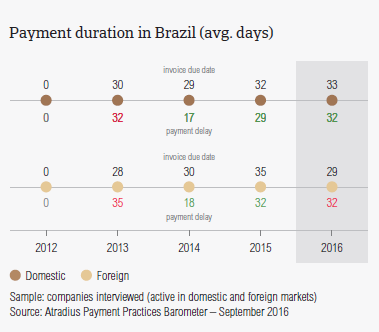 Domestic customers are given slightly more time (33 days) than foreign customers (29 days). This appears to be consistent with the use of credit terms as an alternative source of business funding in a domestic market with tight financial conditions. Over the past year, average payment terms extended by Brazilian respondents to domestic customers did not vary significantly. Foreign customers, in contrast, were given less relaxed terms (on average one week shorter) to settle bills. This may suggest that respondents in Brazil are trying to offset the impact of worsening domestic payment behaviour on their business by shortening foreign credit terms.

Despite being given slightly more time than foreign customers to pay invoices, domestic customers of Brazilian respondents do not settle overdue payments quicker than foreign customers do (both on average 32 days past due). As a consequence of this, respondents in Brazil wait slightly longer to receive payment of past due invoices from domestic B2B customers (on average 65 days from invoicing, above the 59 days survey average) than from customers abroad (61 days, compared to 63 days survey average).

In Brazil, more respondents (nearly 55.3%, notably above the 44.4% survey average) than last year (44.8%) reported late payment of B2B invoices due to liquidity constraints from domestic customers. Similarly, more respondents (27.7%) than one year ago (25.0%) said that late payment of domestic invoices was due to the formal insolvency (bankruptcy, liquidation, receivership) of the buyer. This finding is reflective of the current economic and financial conditions in Brazil. Late payment of foreign B2B invoices due to liquidity issues stemming from the customers’ inability to pay (formal insolvency of the buyer) or intentional delay of payment for financing purposes was reported by around 30% of respondents. The same percentage of respondents reported that late payment of invoices from B2B customers abroad was due to the complexity of the payment procedure related to cross-border transactions.

This may explain why most of the respondents in Brazil (nearly 55.0% compared to 37.0% in the Americas)  reported that they will sell more on a cash basis to their B2B customers over the next 12 months. Around 52% of respondents each (around 40% in the Americas) will request secured forms of payment from their B2B customers and monitor their buyers’ creditworthiness more often over the same time frame. These findings are in line with the insolvency outlook for the country. 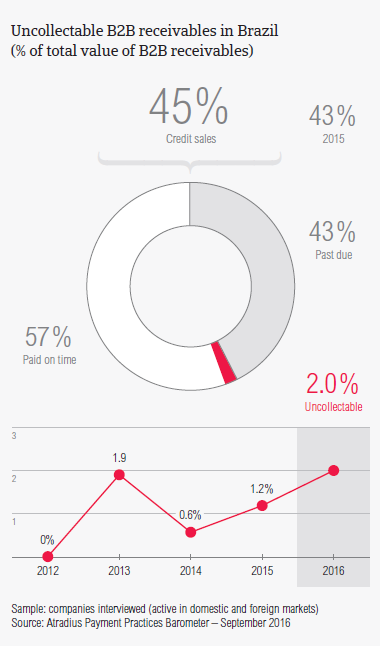 For most of the respondents in Brazil (55.2%, compared to 53.5% in the Americas)  B2B receivables were uncollectable mainly due to the customer being bankrupt or out of business.

Notably more respondents in Brazil (43.6%) than in the Americas (36.8%) wrote off receivables as uncollectable mainly due to the failure of the collection attempts. 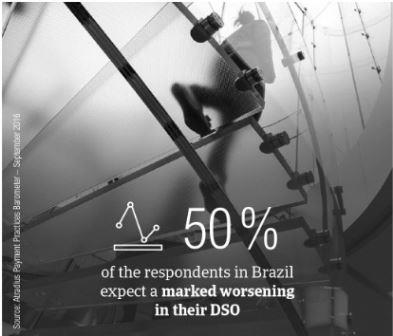 For more insights into the B2B receivables collections practices in Brazil and worldwide, please see the Global Collections Review by Atradius Collections (free download after registration), available from October 2016 on atradiuscollections.com 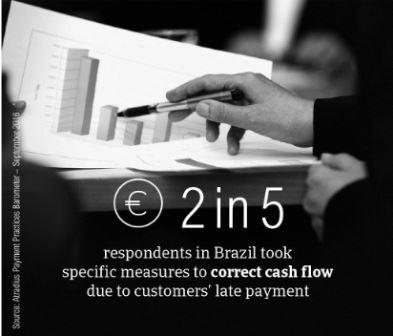 The consumer durables industry generated an above average (for the country) proportion of overdue invoices. However, according to most of the respondents in Brazil (nearly 60%), late payment of invoices due to liquidity constraints from customers occurred most often in the textile and food industries. Late payment in the electronics industry most often resulted from the formal insolvency of the customer (44.0% of respondents).

The machinery sector mainly suffers from a massive decrease in public and private investments, especially in the construction and oil/gas sectors.