In 2017, 92.7% of respondents in Brazil reported late payments from their domestic B2B customers and 86.5% in respect to their foreign B2B customers.

Brazil’s economy is recovering slowly with GDP growth expected to pick up to 0.6% this year after declining 3.6% in 2016. Given its relatively low share of exports to the US, Brazil is less vulnerable to the threat of US protectionism than other countries in the Americas region. However, despite China being a bigger trade partner than the US, respondents in Brazil worry more about risks stemming from US protectionism than risks arising from the slowdown in Asia or from Brexit.

Compared to all other countries surveyed in the Americas (Mexico, USA, Canada), and similarly to what was seen in 2016, respondents in Brazil had the most credit friendly stance. Moreover, there was a small increase in the proportion of B2B sales made on credit in Brazil in 2017 (47.7%) than in 2016 (45.5%). 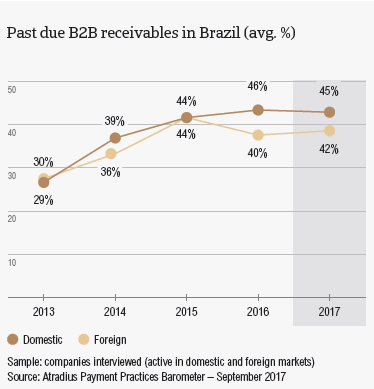 With an average of 63 days, Brazil has the second longest invoice to cash turnaround in the Americas, after Mexico (75 days).

Insufficient availability of funds was the most frequently mentioned reason for payment delays in Brazil and in the Americas overall.

Along with  Mexico (30.7%) and the US (27.7%), respondents in Brazil (27.6%) are some of the most likely to increase their use of credit management tools against the potential impact of Brexit, the slowdown in Asia and US protectionism.

Among the countries surveyed in the Americas, Brazil had the highest value of B2B receivables written off as uncollectable (2.5%). 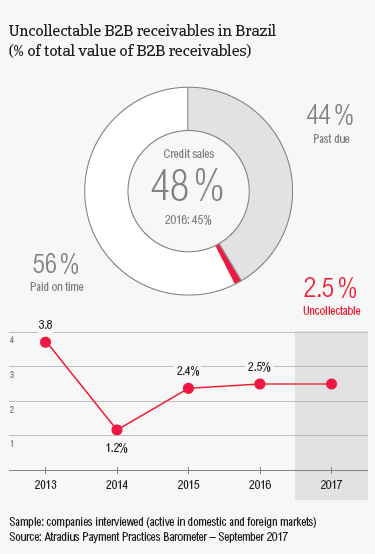 This is slightly higher than the percentage registered at regional level which stood at 2.1%.

Looking ahead, more respondents in Brazil expect a small improvement than deterioration in the payment behaviour of their B2B customers over the coming 12 months.

Mexico: More than the wall

Trump’s threats to revise NAFTA and build a wall at the Mexican border could offer new trade opportunities for businesses in relations with Mexico.

Despite a rebound agrichemicals remains susceptible to sudden changes of exogenous factors like climate, market prices and exchange rate fluctuations.