Like most of their peers in the Americas, respondents in Brazil reported an increase in the proportion of overdue B2B invoices this year.

Brazil had the lowest proportion of overdue B2B invoices in the Americas region. However, the percentage of past due invoices increased impacting 82.6% of survey respondents. The main reasons for payment delays are insufficient availability of funds and the complexity of the payment procedure. The proportion of uncollectable B2B receivables stands at a high 2.5% and is largely driven by bankruptcies.

Credit sales made to enable domestic and international expansion

Historically, respondents in Brazil have been some of the most inclined to sell on credit terms in the Americas region. Despite a decrease of almost five percentage points this year, survey results point to the same open stance with 42.8% of B2B sales made on credit. Respondents are clearly more comfortable selling on credit to domestic B2B customers than to B2B customers abroad (50.0% versus 35.5%). 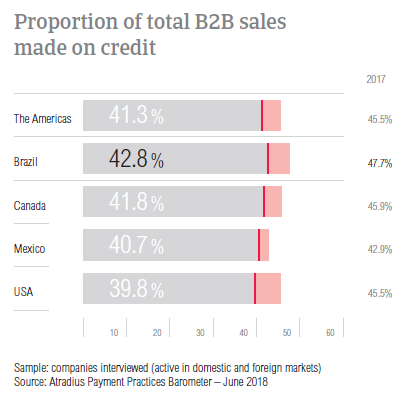 Credit sales are perceived as a way to ensure cash flow and grow business. Brazilian respondents also use these to nurture long-term business relationships and attract new customers. While very inclined to offer credit to domestic B2B customers, respondents in Brazil said that the financial weakness of the customer and the high economic or political risk in the country would prevent them from selling on credit terms.

Trading on credit is essential for my company, in addition to increasing sales and ensuring cash flow.

Brazilian respondents use credit sales with foreign B2B customers to grow the business and nurture long-term business relationships. They believe that it is a way to reward business relationships and attract new customers. They don’t offer credit to their foreign B2B customers when there is high economic or political risk in the customer’s country and if they lack information on the customer’s business or payment performance.

We trade on credit to attract new customers from abroad.

Like most of their peers in the Americas, respondents in Brazil reported an increase in the proportion of overdue B2B invoices. This expanded from 43.6% in 2017 to 45.5% this year. Despite the increase, Brazil had the lowest proportion of past due B2B invoices in the region. 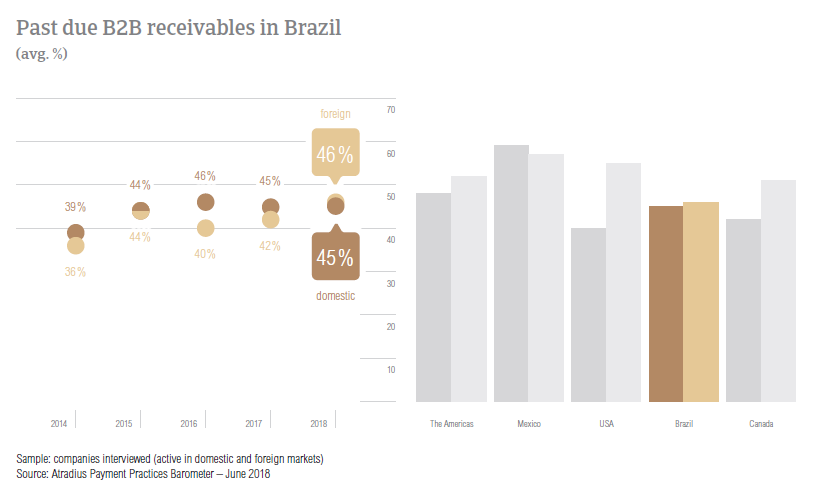 In 2018, the average Days Sales Outstanding (DSO) figure recorded in Brazil is 31 days. This is one day longer than in 2017 and the lowest DSO in the Americas region. 35.7% of respondents in Brazil said that they do not expect any changes in DSO over the next 12 months. A high percentage (29.1%) foresee a slight increase while 16.8% a slight decrease. 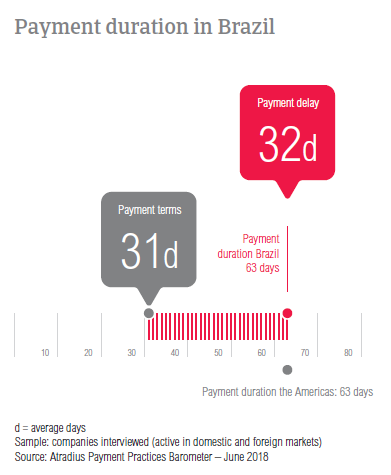 In 2018, average domestic B2B payment terms have not changed compared to last year (31 days). Foreign B2B customers, however, are given 30 days, on average, to fulfil their payment obligations; three days fewer than in 2017.

The highest proportion of uncollectable receivables in the Americas 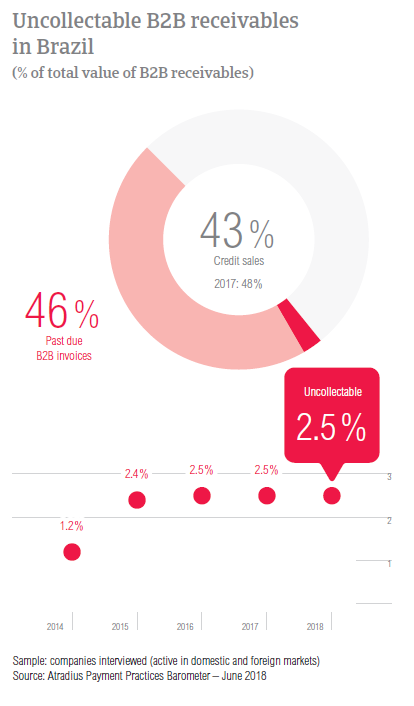 In 2018, Brazil remains the country with the highest average proportion of uncollectable receivables of the countries surveyed in the region (2.5%). The percentage is unchanged since last year with domestic B2B receivables written off more often than foreign ones.

Uncollectable receivables originated most often from B2B customers in electronics, construction, business services and services. The customer going bankrupt or out of business – a common problem in the entire region – was also the main reason for write-offs in Brazil (mentioned by 54.7% of respondents). This was the highest percentage of respondents mentioning this reason among the countries surveyed.

Brazil: bankruptcy proceedings and their effect on companies

Among the four countries surveyed in the Americas, Brazil has the highest percentage of uncollectable receivables. 2.5% of the total value of B2B receivables was written off as uncollectable – no change from last year. The main reason for write-offs remains bankruptcy – and the percentage of respondents stating this went up from 53.4% in 2017 to 54.7% this year.

33.9% of Brazilian respondents believe that the ease of resorting to bankruptcy courts is positive for the viability of companies. 20.2% strongly agree with this statement while 30.3% are neutral. Only 9.2% disagree and 6.4% strongly disagree.

Similar findings were observed in respect to the effect of bankruptcy on the effectiveness of the recovery mechanisms of the creditors. 33.9% of Brazilian respondents said that they agree that the ease of resorting to bankruptcy courts diminishes effectiveness and 14.7% that they strongly agree with this statement. The majority of respondents (34.9%) were neutral. Lower percentages of respondents disagreed (10.6%) or strongly disagreed (6.0%) with this concept.

B2B customers in the construction sector some of the slowest payers

As mentioned previously, Brazilian respondents give their B2B customers 31 days, on average, to pay invoices. B2B customers in the agriculture sector seem to enjoy longer payment terms (on average, 39 days) while those in the metals sector are being asked to pay faster (on average, within 18 days).

Suppliers in Brazil reported that B2B customers in the consumer durables and the construction sectors have been some of the slowest payers. B2B customers in these sectors, paid on average 60 and 65 days after the due date. The main reasons for the payment delays in the consumer durables sector are insufficient availability of funds (reported by 46% of respondents) and the inefficiencies of the banking system (mentioned by 31% of respondents). The main reasons for delays in the construction sector are insufficient availability of funds (mentioned by 45% of respondents), disputes over the quality of goods and services provided and the inefficiencies of the banking system (both reasons stated by 24% of respondents).

Looking ahead, most respondents in Brazil (45% and 51% respectively) expect an improvement in the payment behaviour of their B2B customers in consumer durables and construction sectors.

Despite a rebound, the economic environment remains challenging due to a fragile political landscape, high unemployment, and fiscal policy issues.