Ongoing rebound, but the credit risk situation of several industries remains strained, in particular in the construction and service sectors.

Ongoing rebound, but the credit risk situation of several industries remains strained, in particular in the construction and service sectors. 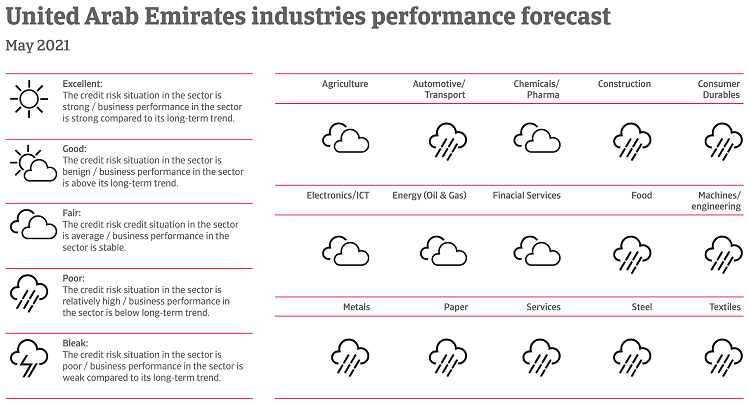 Despite some positive developments, regional tensions remain an issue

The ruling families and traditional tribal structures influence domestic politics considerably. Political parties and trade unions are not permitted, and opposition is virtually non-existent. The Federal National Council (FNC) as a legislative body only has an advisory role. Political and social tensions are low, due to high living standards and sufficient financial support during the coronavirus pandemic. Ample financial buffers allow for gradual fiscal consolidation, making anti-austerity protests unlikely.

The end of the regional boycott of Qatar and the recent normalisation of ties with Israel are positive developments, which should contribute to regional stability and have a positive effect on trade and investment. However, any escalation of the Saudi-Iranian conflict (both are locked in a struggle for regional dominance and are engaged in a variety of proxy wars, e.g. in Yemen) would be a major threat to UAE’s commercial interests, given its status as a regional hub for trade, tourism and finance. The same accounts for a military confrontation between Iran and the US. However, the probability of the latter scenario is currently rather low, given the fact that Washington and Teheran have recently resumed negotiations to revive the Iran nuclear deal.

On the path to economic recovery

After a deep 7% GDP contraction in 2020, the economy is on its path to recovery. Domestic demand benefits from expansionary fiscal policy and from a coronavirus vaccine rollout more rapid than in most other countries. Export revenues are supported by the rebound in global oil price and by the gradual phasing out of oil production cuts imposed by OPEC+. In 2021 GDP is forecast to increase by about 1%, but it could grow even higher, by about 3%, depending on the speed of domestic and global vaccination rollout and on the subsequent containment of the coronavirus.

Despite the ongoing rebound, business performance and credit risk situations of several industries remain strained, especially in Dubai. Construction, services and manufacturing are still about to recover from the recent economic slump. However, the UAE’s purchasing managers index of 52.6 in March 2021 indicates that business activity in the non-oil private sector as a whole is expanding (a score above 50 denotes a positive trend).

The recovery of the property market, which is still struggling with overcapacity, remains rather uncertain. The UAE construction industry was already performing poorly before the coronavirus outbreak, as modest economic growth over the past couple of years prevented higher spending on building projects. This already led to increased cash difficulties and tight margins for construction businesses, especially for smaller players. Construction output in the UAE is currently expected to increase by about 4.5% this year after contracting 4.2% in 2021.

A full recovery of the important tourism industry (accounting for 16% of GDP) will still take some time. The World Expo in Dubai, planned to take place from October 2021 to March 2022, could help revive the sector. However, this depends largely on the pace of the global vaccination rollout and subsequent lifting of travel restrictions.

In order to support the economy amid the coronavirus pandemic, the Central Bank has launched comprehensive measures starting in March 2020 in order to provide liquidity to the market, in the form of things such as zero interest rate collateralised loans, freed-up capital buffers, lower reserve ratios on demand deposits and liquidity requirements. Despite the sizeable liquidity injection by the Central Bank and the relaxation of regulations to financially support to businesses, banks remained rather reluctant to transmit those measures to the market, with lending conditions remaining tight. Profitability challenges in a low-interest rate environment could be a reason for the apparent reluctance of UAE banks to extend credit or offer leniency to borrowers.

Non-performing loans have increased due to increased financial troubles for businesses and consumers alike, to 7.7% in Q3 of 2020, up from 6.4% in Q3 of 2019. Asset quality could weaken further with the expiry of loan repayment deferral schemes, and the exposure of banks to the sluggish property sector (at 20% of total credit) is particularly high. However, banks should be sufficiently resilient to cope with those challenges. The financial sector has remained liquid and well capitalized, with a regulatory capital/risk-weighted asset ratio at 18% in Q3 of 2020. Additionally, banks have increased provisioning in anticipation of a further deterioration in asset quality.

Due to various coronavirus-related stimulus measures and the steep decline in oil prices in H1 of 2020, the fiscal balance turned into a steep deficit (almost 7% of GDP last year), after surpluses in 2018 and 2019. Despite the ongoing diversification of the economy, government revenues still rely for almost 50% on hydrocarbon income, with a fiscal break-even price of USD 70 per barrel. Public debt increased to 78% of GDP last year, up from 61% of GDP in 2020. While large contingent liabilities from state-owned entities add to the public debt burden, the debt sustainability risk is manageable due to the UAE’s large Sovereign Wealth Funds assets, estimated at USD 1 trillion (about 290% of nominal GDP). Those large financial buffers will allow a gradual resumption of fiscal consolidation in the coming years, and public debt is expected return to its pre-crisis level of about 60% of GDP by 2025.

Despite increased external debt (up to 70% of GDP in 2021, from 58% of GDP in 2019), repayments are not an issue. Abu Dhabi has easy access to international capital markets, raising USD 15 billion in total in 2020, including a 50-year term for the first time. While debts servicing costs have increased, they are still low, at 8% of exports of goods and services. At the same time, the UAE underlined its reputation as the most attractive investment destination in the region by receiving USD 14 billion of foreign direct investment (FDI) inflows in 2020, exceeding outward FDI via investments by its SWF. Foreign reserves are double the external gross financing needs and sufficient to limit the risk of the dirham being de-pegged from the USD. The availability of large foreign assets from the SWF serves as a second line of defence.

A benign medium-term outlook, due to ongoing economic diversification and large investments

The state oil company keeps heavily investing in the hydrocarbon industry to increase oil production from 4 to 5 million barrels a day and expand downstream operations. However, at the same time, the government continues to diversify the economy away from oil, attempts to boost private sector growth and aims to establish a knowledge-driven economy in the long-term. The UAE is already one of the most diversified Gulf States (currently non-oil sectors account for 74% of the UAE’s total GDP) and one of the most attractive foreign investment destinations in the MENA region. As a major regional trading hub, the re-export of a wide range of goods accounts for almost 50% of its total merchandise exports.

Foreign ownership requirements have been relaxed (allowing 100% foreign ownership) and visa regulations revamped (to attract highly skilled foreign labour). All this should help to attract higher FDI inflows. Ongoing regulatory improvements, technological pioneering and excellent infrastructure put the UAE in a good position to further boost non-oil industries such as tourism, renewables and financial technology. The diversification process provides trade opportunities for exporters of high-tech goods, as demand has continuously increased over the past couple of years. At the same time, import demand for pharmaceuticals, telecommunication equipment, electrical machineries and food remains strong.

UAE: clouds over the economic outlook

Like all economies around the world, the UAE is dealing with an unprecedented disruption of business activity and tourism

After the Covid-19 pandemic sent a shockwave to the global economy, we are looking at new hope as economies are gradually reopening