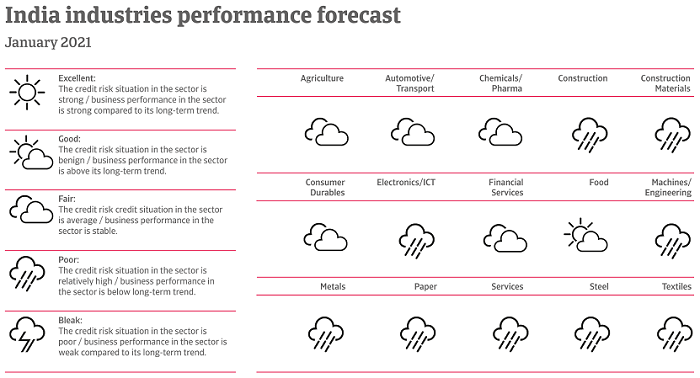 Government still in a strong position, but social tension rising

With a majority in the lower house of parliament winning in the 2019 general election, Prime Minister Narendra Modi’s Bharatiya Janata Party is expected to stay in power until the next general elections in 2024. Before the coronavirus outbreak, resolving the bad debt issue in the banking sector, further liberalisation of foreign investment restrictions in specific sectors and infrastructure projects were high on the agenda.

In early 2020, the government faced some public discontent over the country’s weak economic performance, while the adoption of a controversial citizenship law in December 2019 increased tensions between Muslims and Hindus, leading to severe violent sectarian clashes in early 2020. Another policy measure that fuelled unrest was the revocation of the special autonomy of Jammu-Kashmir in August 2019. Recently, protests of famers flared up after the parliament passed a comprehensive farm reform bill in September 2020.

A longer-lasting coronavirus pandemic and enduring economic downturn, resulting in many people falling into poverty, could lead to increased social tensions. The millions of daily wage earners and migrant workers employed in the large informal sector have been hit particularly hard by the lockdown measures and the recession.

A sharp slowdown of economic growth in 2020

In 2019 India's economy grew 4.9%, the lowest annual increase in more than six years. This was mainly due to a sharp credit slowdown that negatively affected domestic demand, while government consumption remained robust. In 2020 a 7.4% GDP contraction is expected due to the coronavirus pandemic. Above all, the government´s decision to impose a comprehensive lockdown as of end of March has had severe consequences for domestic demand.

As a result of social distancing measures and travel bans, unemployment has sharply increased, and household consumption growth expected to have contracted by about 9% last year. The easing of lockdown measures started in early June 2020, but remains gradual for the time being, while the number of coronavirus cases is still high. Real fixed investment and industrial production are expected to have contracted by 17% and 12% respectively.

Deterioration of industry performance in 2020

In H1 of 2020, extended supply disruptions from China due to the coronavirus outbreak hurt those Indian industries that are heavily dependent on imports, such as consumer durables, electronic manufacturing and pharmaceuticals (more than 65% of electronic components and almost 70% of pharmaceutical ingredients needed for further processing are imported from China).  Across many industries, payment delays sharply increased in Q2 of 2020. For many key sectors like construction, electronics, services and steel/metals, the business performance and credit risk situation assessment remains poor for the time being.

In order to sustain the economy, the Central Bank took measures to sustain the exchange rate and to provide liquidity in the market. Regulations for offering new loans and classifying existing loans were eased. The Central Bank also used open market operations to buy bonds from banks in order to improve their liquidity. In H1 of 2020, the benchmark interest rate was lowered by more than 1 percentage point, to 4%. While upward price pressure limited the room for further monetary easing in H2 of 2020, additional interest rate cuts are likely in the coming months, as inflation is expected to decrease from 6.8% in 2020 to 4.6% in 2021.

With about 1.4% of GDP, fiscal spending to counter the negative impact of the pandemic has been relatively low so far. Measures taken have included tax breaks for small businesses, credit for companies, incentives for domestic manufacturing, and providing cash to low-income households. Additionally, public investments and subsidies on fertilizer have been increased.

While another stimulus package is expected in 2021, the room for further fiscal easing is limited. The government’s revenue collection is still weak, and despite an economic recovery, the budget deficit is expected to remain high at 6% of GDP in 2021, after increasing to 7% of GDP in 2020. The structurally high deficit is partly related to high interest payments, which account for about 25% of government revenues and 5% of GDP.

Due to the high fiscal deficit and the recession, government debt is expected to increase by more than 10 percentage point in the financial year 2020, to 64% of GDP. It is expected that in the course of 2021, the government will gradually take care to consolidate public finances.

India's external balances have improved over the past couple of years. The current account is expected to remain positive (about 1% of GDP) in 2021. External debt remains at a sustainable level (18% of GDP expected in 2021) and the liquidity situation is good, with international reserves at twelve months of import cover in 2021, amply covering both the external financing requirement and short-term foreign debt. India has an excellent payment record, with no missed payments since 1970, providing it with good access to capital markets

A strong economic rebound expected in 2021

After the sharp recession in 2020, the economy is forecast to grow 8.8% in 2021. This will be a result of substantial growth of investments, private consumption and government consumption. The contribution of net foreign trade to the business cycle will turn negative, since rising domestic demand will lead to a strong increase in imports.

Ongoing woes in the financial sector

In general, Indian banks are sufficiently capitalized, reflected by the capital adequacy ratio of 14.5%. Sectoral risks are also mitigated by a limited dollarization (about 7.5% of both loans and liabilities are denominated in foreign currency). However, the net foreign debt of banks (4.7% of GDP) makes them vulnerable to exchange rate volatility. Another weakness is a lack of profitability, reflected by a return on assets of 0%.

In addition, the financial sector also faces a rather high level of non-performing loans (NPLs). The NPL ratio is estimated at more than 10% and concentrated with public banks (which account for more than 70% of the banking sector). Some public banks will probably face capitalization problems soon and require government support. Public sector banks´ lack of adequate recapitalisation in the face of pre-existing credit strains will limit their ability to lend adequately to the private sector. Another downside risk is the large scale of India’s shadow-banking sector, accounting for one-third of recent credit growth.

On the positive side, the government recently consolidated 27 public banks to 12 entities, contributing to sector stability and to the regulatory capacity of the Central Bank.

Asia coped relatively well with the Covid-19 pandemic and an economic recovery is expected in 2021, though with several challenges to trade in the region

Business performance and credit risk has deteriorated in all main industries in India, thus worsening the insolvency outlook this year.