Insolvencies are rising, and structural weaknesses and the negative impact of sanctions on productivity and investment weigh on the economic expansion. 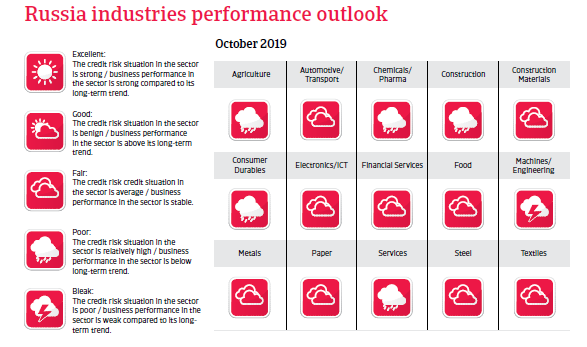 Domestic politics: continued stability for the time being

In March 2018, Vladimir Putin won a fourth term as president of Russia, gaining 77% of the vote. Nationalistic sentiment has risen since the outbreak of the Ukraine crisis and the annexation of Crimea in 2014, supported by aggressive propaganda through the state-controlled media.  However, approval ratings for the government have decreased to pre-2014 levels, following the administration´s announcement in June 2018 to increase the pension age.

Relationship with the EU and the US remains tense

Since the outbreak of the Ukraine crisis in early 2014 Russia’s relationship with the EU and US has gradually deteriorated. Russia´s intervention in the civil war in Syria added another area of conflict to the already strained relationships.

Moscow´s annexation of Crimea in March 2014 and its tacit support of separatist forces in Eastern Ukraine triggered several rounds of sanctions from the EU and the US, mainly in the form of

A VAT increase and sanctions weigh on growth

Russia’s economy remains heavily reliant on exports of oil and gas, which account for 57% of total exports and about 45% of federal government revenues. GDP growth is expected to slow from 2.3% in 2018 to about 1% in 2019, due to a VAT increase from 18% to 20% and the associated higher inflation. Additionally, structural weaknesses and the negative impact of sanctions on productivity and investment continue to weigh on economic expansion. Insolvencies are expected to increase by 4% in 2019, mainly affecting businesses that suffer from decreasing consumer purchasing power.

In 2020, GDP is forecast to grow less than 2%; while a further tightening of sanctions or an escalation of geopolitical tensions pose downward risks. Domestic demand will continue to sustain growth, but decreased real wages weigh on the expansion. The central bank has cut the benchmark interest rate several times in 2019, which should support borrowing. However, a downward oil price shock or additional EU/US sanctions may prompt the central bank to tighten the monetary policy again in order to soften a resulting depreciation of the rouble.

Investments remain constrained by international sanctions and ongoing business uncertainty. They will remain highly dependent on public spending or businesses closely affiliated to the government.

The banking sector has rebounded somewhat

Conditions in the banking sector have improved in recent years, although the threat of new sanctions remains. Large differences remain across financial institutions, and the central bank continues with the clean up of the sector. Public ownership of the financial industry increased to 70%, and divestments are not expected in the short-term. The non-performing loans ratio has declined from a peak of almost 18% at the beginning of 2018 to 8.4% in July 2019. The imposition of sanctions on Russia since 2014 prohibit banks from raising capital in the EU and the US, and may have a very significant mid- and long-term impact on the refinancing capacity of major domestic corporations and banks. However, the authorities have sufficient resources to support all systemically important banks.

A combination of cuts in real expenditures and growth in oil prices led to a budget surplus of 3.0% of GDP in 2018. The government will continue to pursue a conservative fiscal policy in the coming years. In 2019 and 2020 annual surpluses are expected, with higher VAT revenues likely to compensate for any shortfall caused by weaker domestic demand. It is anticipated that government debt will remain low at about 13% of GDP. Recently announced social spending measures amount to only 0.1% of GDP so far, and will therefore have little impact on fiscal policy.

The Central Bank allows the rouble to float. This has an impact on inflation if the currency depreciates, but also acts as a shock absorber for the current account, which is expected to remain in surplus in 2019 and 2020, due to sizeable trade surpluses. Foreign debt is expected to decline slightly over the coming years, to 22% of GDP in 2023, and to be relatively robust against external shocks. The recovery of oil prices has led to an increase in foreign exchange reserves, which amounted to 16 months of imports at year-end 2018.

The medium-term prospect for higher and sustainable growth rates remains subdued. Structural weaknesses (such as a shrinking workforce, low investment growth, institutional weaknesses and limited reforms) and the negative impact of sanctions on productivity and investment will continue to weigh on growth, estimated at 1.5%-2% annually in the coming years

The Russian business climate is mired in uncertainty regarding property rights, a weak transport infrastructure and a lack of competition in goods and services markets. The authorities failed to seize the opportunity during the windfall years to strengthen Russia’s economic structure and enhance its non-oil potential by prudently investing oil revenues in other industries to diversify the economy away from the dominant oil and gas sector.

There is an underlying deterrent for investments, badly needed to modernise the energy sector and to help diversify the economy. Even before the outbreak of the Ukrainian crisis, the investment level was too low and foreign direct investment too limited, partly due to an unfriendly business climate and the firm grip of the state on large parts of the economy. This is now exacerbated by the international sanctions imposed by the EU and the US that aim to prevent technology transfers and financing to Russian firms, especially in the energy and military sectors. 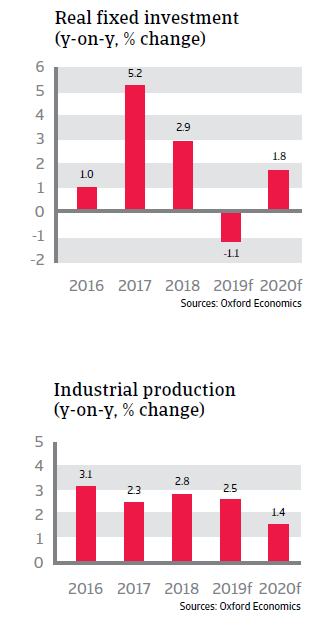 Russia remains an important market in the global economy. The ten easy to follow principles of the report are meant to help businesses mitigate risks when exporting to Russia.