Peronists back in power, herculean task ahead

Peronists back in power, herculean task ahead | Atradius

Regaining investors’ trust will be key to Fernández’s success in reinvigorating the Argentinian economy, but it is not the only thing.

However, Mr Macri’s centre-right Juntos por el Cambio (JC) coalition remains an important counterbalancing force. His JC coalition will be the largest in the Chamber of Deputies. The new administration will have to co-operate with the JC in order to set their policy agenda, and there are preliminary signs that Mr Macri and Mr Fernández are willing to do so – the dire state of the economy leaving them little choice.

Among the president-elect’s top priorities are stabilising the economy and rebuilding trust among businesses and investors. The economy is contracting since last year (expected to contract 3% in 2019 and by more than 1% in 2020), inflation is stubbornly high at an annual rate of more than 50%, unemployment is over 10% and the poverty rate has increased to more than a third of the population.

Confidence collapsed after the unexpectedly large defeat of Mr. Macri in the August primary elections, reflecting fears of particularly the local business community and investors that a return to power of the Peronists would mean a repeat of their interventionist, protectionist and business-unfriendly policies, and successive sovereign defaults.

The result of this confidence crisis was a sharp peso depreciation (by about 25% against the USD) and dwindling official reserves (by about 20%), forcing the government to impose partial currency restrictions as of September 2. Those restrictions have been even tightened on election day, reducing the maximum amount of US dollars that Argentineans could buy from USD 10,000 per month to USD 200, in order to prevent further declines in the peso and official reserves.

Despite the controls, official reserves had fallen by 20% since their imposition, while the peso reached a new record-low (almost breaching the ARP 60 per USD mark) just before election day (see chart). So far, the additional tightening seems to have worked to stabilise the currency, as the peso modestly appreciated after election day. That said, the peso weakened in the black market to 77 per dollar, which is fuelling investors’ concerns about the scope of the restrictions.

For the time being, the restrictions do not impair the ability of businesses to access foreign exchange for trading or debt service purposes. However, given the low level of reserves and the challenging economic environment further tightening of the restrictions cannot be excluded. 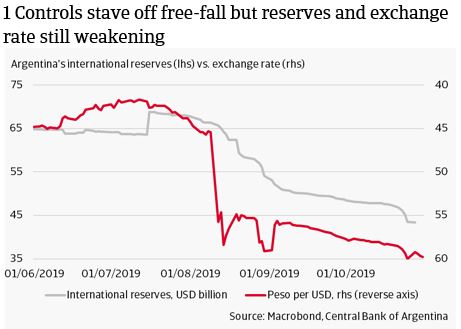 So far, the president-elect has been rather vague about his economic policy agenda. He is generally seen as more pragmatic than his running mate Mrs Fernández de Kirchner. He even resigned as her cabinet chief in 2008 due to Kirchner´s increasingly populist policies, including a decision to impose heavy limits and export taxes on the country’s farmers.

Mr Fernández faces a very challenging task to keep the different factions of the Peronists on board, meet his election promises of no more austerity measures, while at the same time trying to rebuild trust among businesses and investors. Most urgent will be renegotiating with the IMF and providing more details on a proposal to restructure the sovereign’s debt to private creditors, which was announced last summer.

The USD 57 billion IMF programme agreed last year, by far the largest ever provided in absolute amounts, looks off-track following the confidence crisis, with the fifth review having been postponed until after the elections. Although Mr Fernández has been critical about the IMF during his campaign, it is generally believed that he will take a more pragmatic approach once in office.

With respect to the debt restructuring, Mr Fernández has echoed the intentions of the Macri government, saying that this would be a ‘voluntary reprofiling’ and that all contracts would be respected. However, the process will be very complex and lengthy, while the risk of a new sovereign default (the ninth in Argentina’s history) remains very high. This is also due to the hump in debt amortisations to external private creditors of USD 17 billion in 2020 and the government’s dwindling official reserves. The key factor will be the degree of fiscal adjustment to which the new administration is willing and able to commit.

Between a rock and a hard place

The room for disappointment among Argentine investors and voters is high. If the new president and his team do not regain investors’ trust, a new sovereign default could follow, making it difficult to attract the financing needed to re-start the economy. However, breaking the election pledge of ending austerity could result in widespread social upheaval, which could make investors even more hesitant to invest in the country. The longer the period of uncertainty about policy direction, the higher the risk of outright default. In any case, tackling Argentina’s deeply rooted economic problems will be hard and take many years.

Argentina: Peronists back in power, herculean task ahead

Argentina has introduced currency controls to stabilise peso in the run-up to elections.

Coupled with high interest rates of more than 60% austerity measures will deepen and lengthen the economic contraction, and a rebound expected in late 2019 at the earliest.