World trade growth stagnated in Q1 amid the escalating trade war. While we expect some recovery in 2019, further escalation of the trade war could grind growth to a halt.

Trade tensions between the United States and China continue to simmer. After another flare-up in May, the chances of an agreement putting an end to tit-for-tat tariffs have plummeted. A new truce could be agreed between President Trump and President Xi at the G-20 summit in Japan on June 28 and 29. However, this remains highly uncertain and even if one is reached, it is not likely to remove the tariffs that are already in place. As such, we see international trade growth staying muted in 2019 and 2020. Further escalation remains a realistic possibility which could spell disaster for global trade.

The trade war between the United States and China goes back roughly to April 2018, when the US imposed tariffs on steel and aluminium from all suppliers – not just China. China reacted by imposing tariffs of up to 25% on 128 US products. What followed were several rounds of punitive trade measures between the two countries (see chart 1). In the latest round, Washington raised the tariff rate on USD 200 billion of Chinese imports from 10% to 25%, claiming that Beijing had backtracked on almost all aspects of a draft US-China trade pact. China retaliated by raising tariffs on USD 60 billion of US imports from 5% to 25%.

Meanwhile those bilateral tariffs amount to 1.8% of total world trade. The US has raised tariffs on Chinese goods worth USD 250 billion, mainly targeting machinery and equipment intermediate goods. The US administration has threatened tariffs on the USD 325 billion of Chinese goods that are still unaffected by import duties, expanding into consumer goods. China has retaliated with tariffs on USD 110 billion worth of imports from the US and has also threatened to raise tariffs on all imports. This would raise the share of total world trade directly affected to 3.7%. Additionally, indirect effects are felt through confidence, investment and supply chain channels.

However, the conclusion that China is less affected by the trade war could prove misleading. Strong underlying US import growth masks the export decline of those Chinese sectors affected by US import duties. Intermediate and capital goods are the primary goods targeted by US tariffs, thus affecting sectors like metals, plastic, and machinery. These sectors have seen their sales to the US drop by 20% to 40%, whereas sales to the US are up 12% in sectors that are unaffected by the tariffs. Without US tariffs, Chinese exports to the US could have increased 9% to 10% instead of the overall 9% decline.

The impacts observed thus far are also disproportional due to the nature of targeted exports from each country. Around a third of US exports to China are farm products and raw materials, which are price-sensitive and relatively easy to replace with other products. In contrast, most Chinese exports to the US are manufactured goods which are more differentiated and where China often has high market shares. So while China was able to substitute US agricultural imports with goods from other countries, the US faces a costlier and more time-consuming shift to other suppliers.  China’s exports will be more strained over time as supply chains adjust and the US finds other suppliers.

Trade wars have significant economic costs. Model-based estimates by Oxford Economics estimate that the final cost for the US of the trade measures is 0.2% of GDP (excluding the latest round of tariffs increases as of May 10). The cost of the trade war for China is estimated at 0.5% of GDP. While global GDP will not be significantly impacted, there is certainly some collateral damage observed in other countries. Negative effects are especially large in countries that are key suppliers to Chinese industries, such as Japan, Taiwan, Vietnam and South Korea, where exports to China have slumped by 10% to 20%. On the flipside, some trade from Southeast Asian economies is being diverted from China to the US (see chart 3). 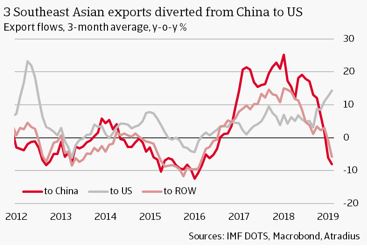 Trade stagnated in Q1 of 2019, making it the weakest quarter for world trade growth since Q4 of 2009, the height of the financial crisis. The stagnation observed is largely a result of rollover from Q4 of 2018. On top of negative effects of rising protectionism, trade was held back by weaker economic growth, financial market volatility, and tighter financial conditions in advanced economies. Economic growth has been stronger-than-expected in Q1 of 2019, especially as fiscal stimulus underpins Chinese import demand, and central banks in developed markets have paused or reversed their plans of monetary tightening. The temporary nature of this slowdown support our outlook that trade growth should recover after a cyclically weak 2018. New tariffs and retaliatory measures on the other hand are not so temporary, but, as discussed above, we can also see trade adjusting to them. The temporary nature of the slowdown can better be seen in trade momentum figures, particularly in Emerging Asia (rolling q-o-q growth; see chart 4).

However, with such a weak start to the year, the 2.7% we previously forecast in the Economic Outlook is no longer realistic. Taking into account Q1 data and the latest escalation in the trade war, we now expect that the structural recovery in trade flows in the remainder of the year could only bring world trade growth to 2.0% in 2019. We expect these drivers to continue to support growth in 2020, bringing trade growth up to 2.8%. However, with large volumes of trade already under higher tariffs and significant policy uncertainty, the downside risks to this outlook are high. 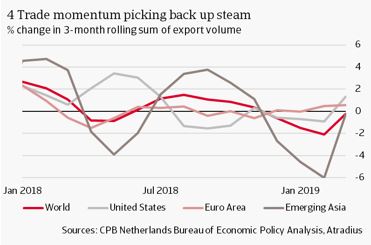 The costs incurred by the US as a result of the trade war are unlikely to deter it from persisting with its aggressive trade policies against China. A short-term truce may be possible after the G-20 meeting in Japan, but trade tensions are unlikely to fade completely and current tariffs are expected to stay in place. Both the US administration and Congress are willing to take a tougher stand on structural issues that are not easy to resolve, such as the violation of intellectual property and forced transfer of technology, keeping policy uncertainty elevated. As such, our outlook for global trade is relatively bleak.

Outspoken trade tensions between the world’s two largest economic powers appear to be the new normal, increasing the risk of escalation beyond the current tariffs. This would be significantly worse for global trade flows. We explore two scenarios – a moderate and a severe escalation of the trade war – developed by Oxford Economics (OE). We then forecast the impact of these scenarios on our trade forecasts.

A moderate escalation of the trade war includes the threatened tariffs presented in chart 1. The US extends the 25% tariff to all Chinese imports (worth USD 575 billion), while China retaliates by doing the same to USD 150 billion of imports from the US. Moreover, the US implements a 25% tariff on all cars and car parts imports (excluding imports from Canada and Mexico). US trade partners retaliate with matching tariff hikes on auto imports from the US. OE estimates that this would trim 0.1 percentage points off world GDP growth this year (2.6% instead of 2.7%) and eliminate any recovery in 2020 (2.5%). The effects on global trade would be even more dire. We estimate that world trade would slow even further to only 1.3%, below the latest slump observed in 2016. After this initial shock, we predict that trade would recover to 2.1% in 2020, as countries adjust through trade and international supply chain diversion.

A severe escalation into a full-blown global trade war would be disastrous for international trade growth in 2019 and 2020. In this case, the US hikes tariffs higher than 25% on all Chinese imports and China retaliates in turn. The US also slaps 25% tariffs on all car and car part imports, but removes exemptions for Mexico and Canada. On top of this, the US levies 10% tariffs on all imports from other key trading partners, including the EU and Japan. This is met by retaliation of matching tariffs on US imports.

The fall-out of the severe escalation scenario is substantial. There will be a sharp slowdown in global GDP growth, to 2.3% this year and 1.4% in 2020. In this worst-case scenario, we estimate that trade growth would grind to a halt in 2019 with growth forecast at only 0.2% and a contraction of 2.3% in 2020. This is due to the global economic slump reducing overall demand for trade. Additionally, direct trade barriers between the world’s largest economies would also sharply reduce exports for countries integrated in global supply chains – especially open Asian economies. Furthermore, the acute rise in risk aversion increases financial market volatility and negatively affects consumer and business sentiment, resulting in a postponement of investments and large consumer purchase decisions.