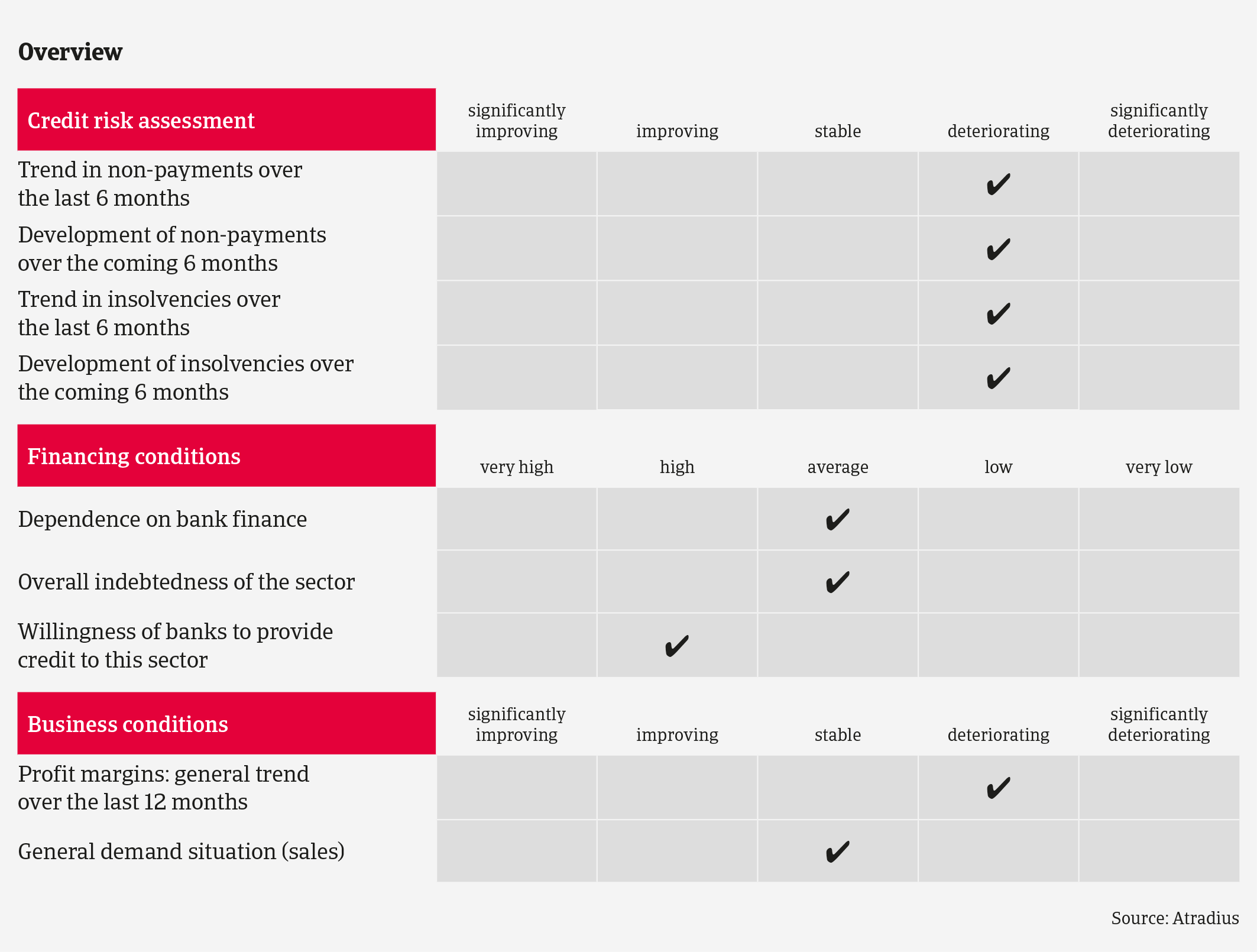 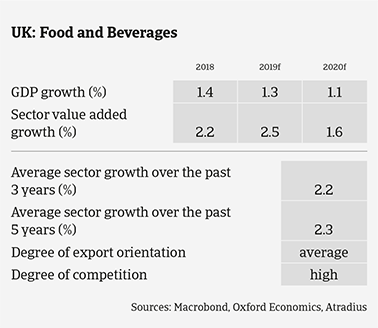 The British food and beverages sector value added is forecast to grow 2.5% in 2019, followed by a 1.6% expansion in 2020. However, major challenges remain. Exchange rate volatility and its impact on costs of commodities and food items remain an issue for many British food producers and processors reliant on imports (more than 45% of food consumed in the United Kingdom is imported). The positive effect of the recent sterling rebound has been limited so far, as many UK importers are bound by contracted prices agreed at a lower sterling exchange rate.

As a result, input costs for British food businesses remain high, while the chances to pass on price increases to retailers are limited. Both further consolidation in the retail segment (especially among large retailers) and the increasing market success of discounters putting traditional retailers und pricing under pressure continue to weigh on suppliers along the food supply chain.

Major issues in the meat and fruit and vegetables segments

After a 2.3% decrease in 2018, value added growth in the meat subsector is forecast to contract 1.6% and 0.4% in 2019 and 2020 respectively. Higher input costs severely impact the highly import-dependent meat businesses, adding pressure on already thin margins. Additionally, slaughter prices for pigs rising as a result of the African swine fever epidemic. A hard Brexit scenario would pose a substantial threat to the meat subsector.

The fruit and vegetables subsector is also highly dependent on imports. As this subsector is dominated by small and medium-sized enterprises (SME), it is particularly susceptible to foreign exchange volatility, as there is limited forward buying. As in the meat subsector, many SMEs lack resources and skills/expertise to effectively manage risk mitigation with forward contracts and currency hedging. Furthermore, there is a significant threat of spoilage (e.g. delays at ports given limited shelf life) in this segment.

Value added in the dairy subsector is expected to increase 2.1% in 2019 and 1.7% in 2020. While not overly reliant on milk imports, pricing pressure on small and large processors remains high due to elevated input costs and the unwillingness of supermarkets to increase sales prices. Fixed price contracts remain a large feature of this sector, and all parts of the supply chain struggle to recover margins when prices or supplies decrease.
The beverages segment continues to perform well, dominated by large multinational groups with significant funding. However, the recently imposed US tariffs on EU imports are a major threat to the Scottish Whisky segment (Scotland´s second largest export product).

Leverage with retailers is limited by the fact that the food producer/processing segment is dominated by small and medium-sized players in a highly fragmented market. Profit margins of food businesses deteriorated further in 2019, a development expected to continue in 2020. It does not help that despite increased real incomes UK consumers remain price-sensitive. This is especially affecting processors and producers that supply casual dining chains. In 2019 food producers and processors continued to pursue mergers and acquisitions in order to increase their leverage in price negotiations with major retailers and to diversify their product offering.

Payments in the British food sector take between 45 and 60 days on average. Some larger players continue to push the supply chain on price and longer payment terms, adding cash flow challenges to mainly smaller food businesses. Due to an inability to absorb higher input costs and increased pressure on margins, both payment delays and insolvencies have increased this year, and we expect this negative trend to continue in 2020. Food business failures are expected to rise by about 8%, and should there be a hard Brexit this increase would be even higher.

Our underwriting stance remains restrictive for the meat and the fruit and vegetables subsectors due to the issues mentioned above. We remain neutral for dairy and beverages, in the latter segment monitoring any potential impact of US tariffs. While we remain generally open for food retail, the ongoing success of discounters is driving structural change within this subsector, hence there is significant consolidation in the market.

As in 2018, the levels of both short firm fraud and impersonation fraud have remained stubbornly high in 2019, mainly in the meat and fruit and vegetables subsectors, and no improvement is expected in 2020. We have observed an increase in disputed shipments, with customers claiming the quality of the goods delivered in order to renegotiate a lower price. 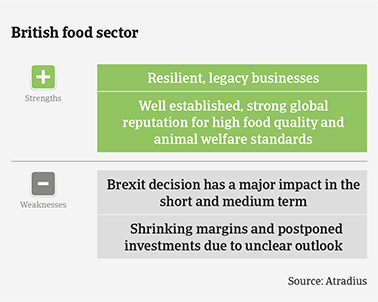 The UK is facing the highest increase in insolvencies in 2019 and 2020 in Western Europe.

The UK car market continued to grow last year. Compared to other UK industries, the automotive sector’s default and insolvency rate is good, with a stable outlook.