Poor payment behaviour, a lack of information about the business or payment performance of customers, and economic and political risks have led to a reduction in the proportion of B2B sales in the Asia Pacific region being made on credit terms. However, the frequency of late payments seems to have declined as has the proportion of overdue B2B invoices. Still, the impact of late payments cannot be denied and it is taking businesses in the region more time to convert B2B invoices into cash. While 2018 brought small changes in the average proportion of uncollectable B2B receivables, some things remain the same – the main reason for writing off B2B receivables as uncollectable is the customer going bankrupt or out of business.

Trading on credit – still an important aspect of doing business 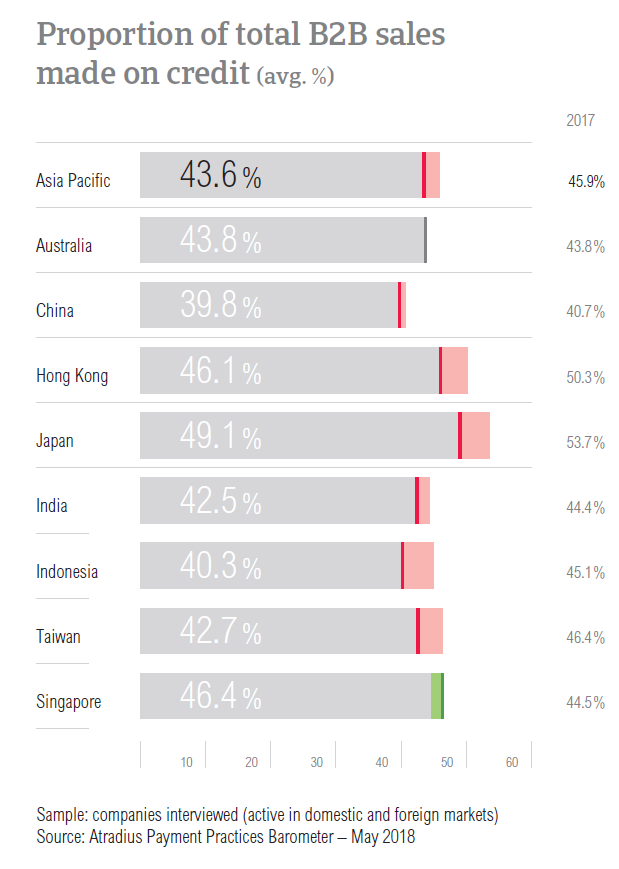 With the exception of Australia and Singapore the use of trade credit in B2B transactions in the Asia Pacific countries surveyed is lower in 2018 than it was in 2017. As a result, the proportion of B2B credit sales in the region decreased from an average of 45.9% in 2017 to 43.6% in 2018. This marks the third consecutive of decline. This was mainly due to an almost five percentage point decrease in transactions on credit with foreign B2B customers. By country, respondents in Japan (with an average of 49.1% of B2B sales on credit terms) seem to be the most inclined to offer credit terms; respondents in China are the least inclined (on average, 39.8% of B2B sales on credit terms).

Respondents in Asia Pacific are more likely to sell on credit terms to their domestic B2B customers than to their foreign B2B customers. Domestic credit terms seem to be granted mainly to facilitate business and local expansion, because credit sales are common practice and because respondents feel that this payment method is more convenient. There is also a shared belief that selling on credit domestically builds trust, supports trading relationships and helps attract new customers. These reasons point to important benefits for trading on credit, so why would respondents in the region refuse to grant credit terms? 35.8% of respondents said that this is due to the poor payment behaviour of their domestic B2B customers and 34.6% that it’s a decision based on the lack of information on their customers’ business or payment performance.

We are granting trade credit to our domestic B2B customers mainly because we would like to maintain collaboration and this helps cash flow for both businesses.

Businesses in Asia Pacific seem to grant trade credit to foreign B2B customers mainly because of the same reasons, common practice, convenience, to build trust and relationships and to attract new customers. There are, however, different explanations for refusing credit sales. More specifically, 45.5% of respondents in Asia Pacific said that they refuse to grant credit terms to their B2B customers abroad because there’s a high economic or political risk in the customers’ country, 38.8% due to high currency risk and 32.8% because they lack information on their customers’ business or payment performance.

Trading on credit is a way to build trust.

In Asia Pacific, the frequency of late payment has declined from an average of 89.2% in 2017 to 87.9% this year. This improvement occurred because respondents from all countries surveyed in the region – with the exception of Indonesia and India - reported payment delays less frequently than one year ago. Similarly to what has been observed in previous surveys, late payments seemed to occur almost as frequently with domestic and foreign B2B customers.

In 2018, the average Days Sales Outstanding (DSO) figure recorded in Asia Pacific is 40 days, showing no changes from last year. Similarly to 2017, the majority of respondents in the region (50.3%) do not expect to see any changes in their company’s DSO figure and 22.2% expect a slight increase over the coming 12 months.

The Asia Pacific countries most impacted by late payment 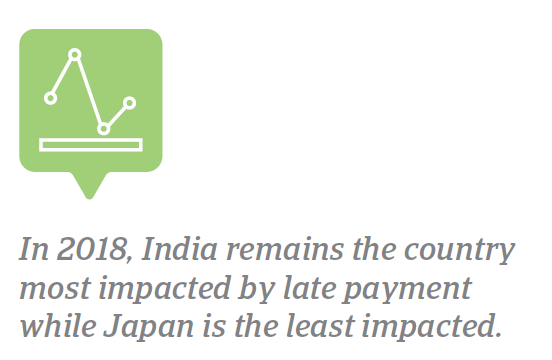 In 2018, the average frequency of late payment was highest in Indonesia, Singapore and India (91.0%, 91.1% and 94.7% respectively). In contrast, and despite a minor increase observed in 2018, Japan remains the country with the lowest frequency of payment delays (on average, 70.2% of respondents reported payment delays).

A longer time to convert B2B invoices into cash

The impact of and reasons for payment delays

Payment delays in Asia Pacific have remained largely stable in 2018, with no changes reported in respect to domestic B2B customers (on average, 24 days) and an increase of one day in regards to foreign B2B customers (on average, 26 days). Australia and Singapore reported decreases in payment delays from both their domestic and foreign B2B customers. In contrast, and despite already reporting the longest delays in the region, respondents in India declared further increases. 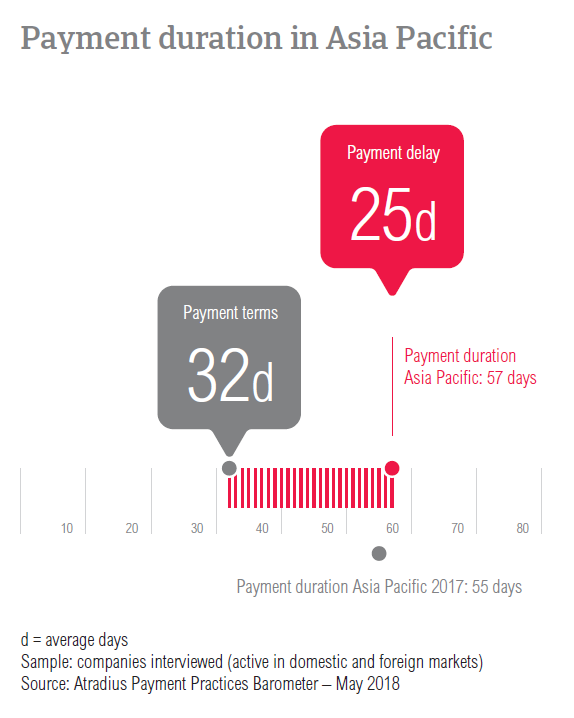 The fastest/slowest invoice to cash turnaround in Asia Pacific 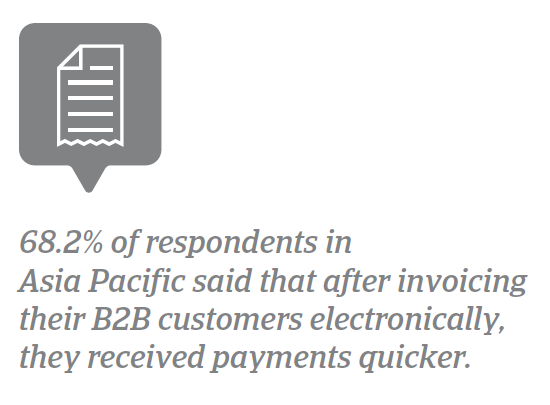 Despite the differences in implementation, the Asia Pacific countries surveyed seem to have broadly migrated towards paperless invoicing. But has the change to the online environment accelerated payments? 68.2% of respondents in Asia Pacific said that after invoicing their B2B customers electronically, they received payments quicker. This compares to a low 4.9% who said that e-invoicing led to a slowdown in payment and 26.9% of respondents who said that e-invoicing had no noteworthy effect.

In the context of growing insecurity due to global protectionist measures the fear of turnover losses is one that cannot be neglected when trading internationally. 25.5% of respondents in Asia Pacific expect as much as a 10% impact on their turnover due to uncertainty over and changes in trade agreements. A slightly lower percentage of 19.2% believe the impact on their businesses’ turnover will be more significant, between 10% and 20%.

In contrast, 35.1% of respondents in Asia Pacific do not expect that their businesses’ turnover will be negatively affected by the uncertain prospects for international trade. The increased percentage is mainly due to the high percentages of respondents in Australia and Japan who said that they are most likely to not be impacted (53.6% and 50.9% respectively). 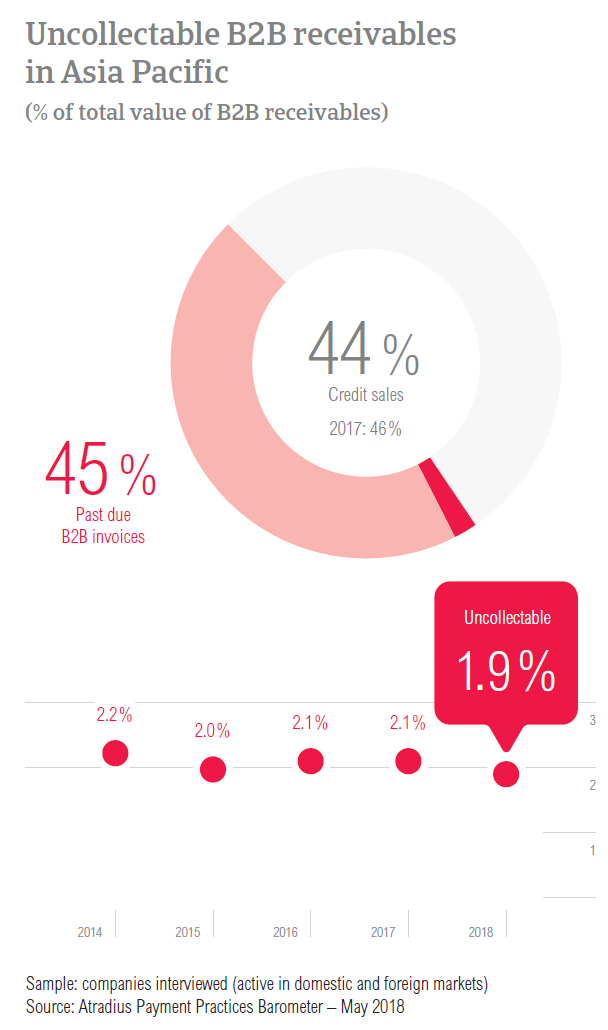 Uncollectable receivables in Asia Pacific originated most often from the consumer durables, construction, electronics and business services sectors. B2B receivables were reported to be uncollectable mainly because the customer went bankrupt or out of business. This view seems to be shared by 50.1% of respondents in Asia Pacific, a higher percentage than the previous year. Secondary reasons were the age of the debt (cited by 37.3% of respondents) and the failure of collection attempts (cited by 36.3% of respondents). 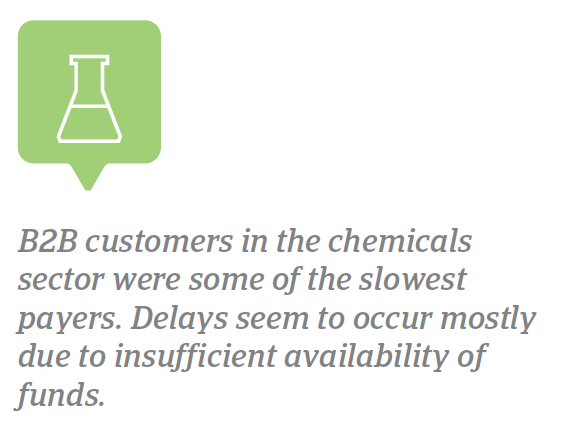 B2B customers of respondents in the chemicals and construction sectors seem to have generated some of the longest payment delays. Domestic and foreign B2B customers in these sectors paid, on average, 31 and 27 days late respectively. Similarly to what was stated at regional level, the main reasons for payment delays were insufficient availability of funds and disputes over the quality of goods delivered and services provided.

Following the payment delays experienced this year, the majority of respondents in Asia Pacific reported that they do not expect any changes in the payment behaviour of their customers in the chemicals and construction sectors. This seems to be a shared belief in regards to B2B customers in all sectors. However, of those who do expect to see a change over the coming 12 months, 37.0% expect an improvement and 16.0% foresee a deterioration.

The profit margins of Indian non-food retailers are expected to moderate in 2018 due to growing competition and the rising market share of e-commerce.