Survey results highlight small improvements for China in 2018 – late payments were reported less frequently, there is a minor decline in the average proportion of overdue B2B invoices and a faster invoice to cash turn-around was observed. However, the impact of late payment cannot be denied with a notable percentage of respondents reporting revenue loss. Bankruptcy and failed collection attempts remain the top reasons for write-offs and consumer durables is once more a problematic sector. 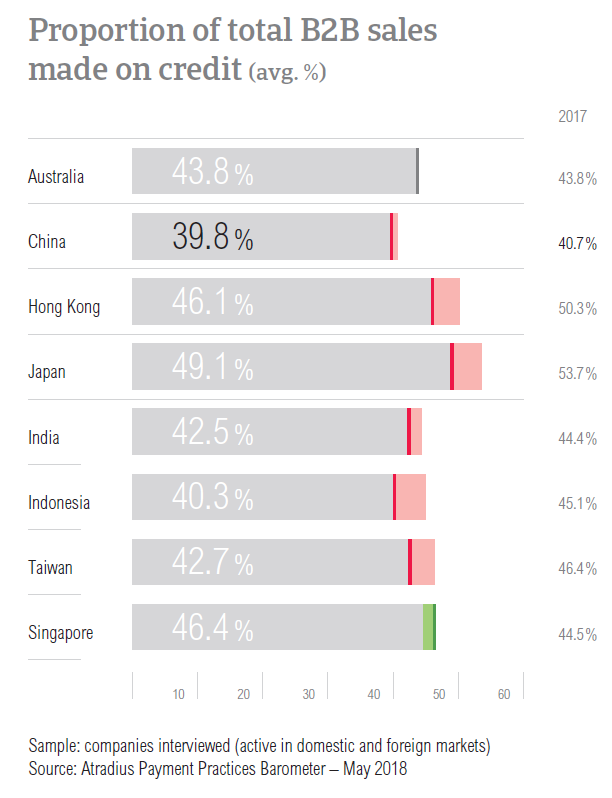 Historically, respondents in China have been the most averse to selling on credit terms in the Asia Pacific region. 2018 survey results point to the same conservative stance with only 39.8% of B2B sales made on credit. There remains a greater reluctance to sell on credit to foreign B2B customers than to domestic B2B customer (32.5% versus 47.1%).

Chinese respondents seem to be granting trade credit to their domestic B2B customers due to their familiarity with domestic business practices, to nurture long-term business relationships and because they wish to grow their businesses domestically. Moreover, selling on credit is seen as a way to reward loyalty and attract new customers. When asked about the main reasons for refusing credit sales to their domestic B2B customers, 60% of respondents said that this is due to a lack of information on the customers’ business or payment performance and 40% said that it is because of the financial weakness of the customer.

We sell on credit because we have a long-term cooperation with most of our domestic customers and this comes with a certain degree of trust.

Chinese companies mainly grant trade credit to their foreign B2B customers to further open up sales and expand their international activity. Long-term cooperation seems to also influence this decision as it helps build trust and provides insight into the customers’ payment behaviour. Respondents in China mainly refuse credit sales to their foreign B2B customers because of high currency risk (mentioned by 55.6% of respondents) and high economic and political risk in the customer’s country (mentioned by 38.9% of respondents).

What we are trying to achieve with trade credit in our transactions with foreign B2B customers is to further open up sales and expand our activity internationally.

In 2018, the average Days Sales Outstanding (DSO) figure recorded in China is 29 days, four days lower than in 2017. This is the lowest DSO in the Asia Pacific region and is significantly below the regional average of 40 days. Most respondents in China (47.9%) do not expect any changes in their company's DSO figure over the coming 12 months. However, a significant percentage (27.0%) expect a slight increase over the same time frame.

Next to their peers in Indonesia and Australia, respondents in China are setting the shortest average payment terms for their domestic and foreign B2B customers. Domestic B2B customers of respondents in China are given, on average, 27 days to settle their invoices. This is two days longer than in 2017. In contrast, foreign B2B customers are given, on average, 26 days to fulfil their payment obligations – seven days shorter than in 2017.

While 2018 survey results do not highlight differences between average payment terms by customer type, 79% of respondents in China said that they are very likely to differentiate between domestic and foreign B2B customers. Moreover, the majority of respondents, 59.0% said that they would give their domestic B2B customers a shorter time to fulfil their payment obligations. This suggests that the domestic buyers of respondents who give their foreign buyers less time to pay receive significantly more time to pay than the foreign buyers. The main reasons for differentiating payment terms in China are internal policies, industry practices and the economic situation. 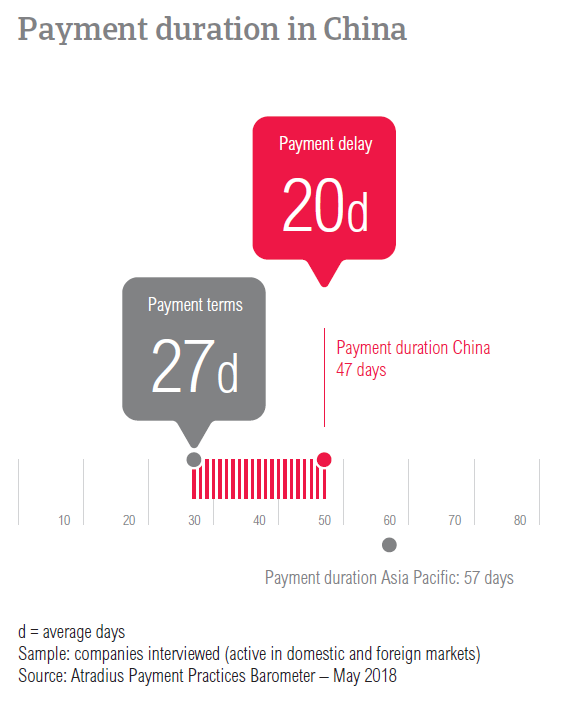 Payment delays by domestic B2B customers seem to occur most often because of insufficient availability of funds. This was stated by 42.4% of respondents. Respondents in China also cited disputes over the quality of goods and services provided (27.7%) and the complexity of the payment procedure (27.1%) as other reasons for domestic payment delays.

Next to Singapore, China was the only country in Asia Pacific to experience a decrease in payment duration. More specifically, the average payment duration in China decreased from 51 days in 2017 to 47 days this year. This means that respondents in the country need a shorter time to convert B2B invoices into cash, on average, 10 days less than in Asia Pacific overall. 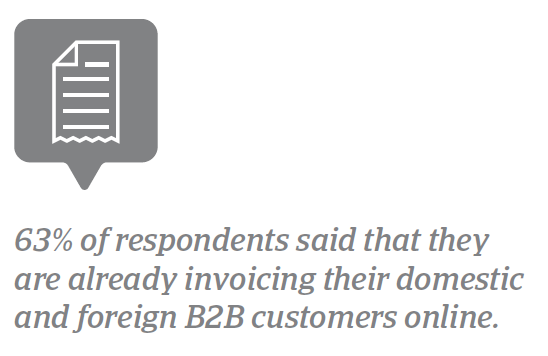 6% of respondents in China – probably focusing primarily on domestic B2B sales – expect to see improvements based on the changes at global level. 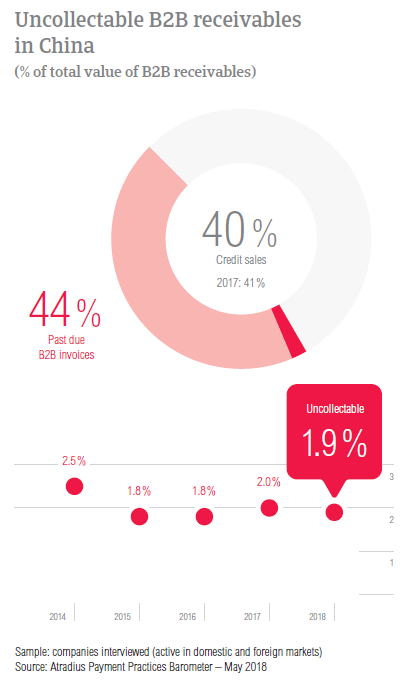 Uncollectable receivables originated most often from B2B customers in consumer durables, construction, chemicals and services. Similarly to what was stated at regional level, the main reason for writing off B2B receivables as uncollectable is the customer going bankrupt or out of business. In 2018, this was stated by 46.6% of respondents. A second most frequently reported reason for write-offs is the failure of collection attempts, stated by 39.0% of respondents in the country. 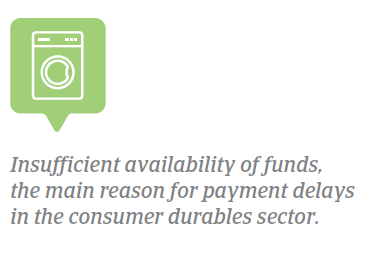 59% of respondents in the chemicals sector and 43% in the consumer durables sector do not expect changes in the payment behaviour of their B2B customers over the coming 12 months. However, they remain optimistic, should a change occur, most respondents expect it to be for the better.

Business insolvencies in China are expected to increase further this year in 2018, as companies face tighter credit conditions and the economic rebalancing process is on-going.