However, the key drivers of growth in the region remain a resilient domestic demand and rising wages. On the export performance side, uncertainties surrounding global trade are weakening trade prospects and casting a shadow on business confidence. 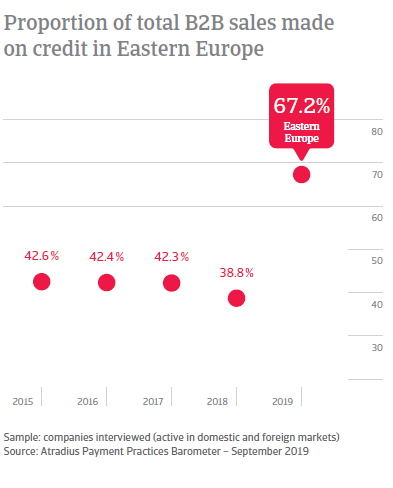 Except for Bulgaria, average payment terms in Eastern Europe are longer than one year ago

Besides offering trade credit more often than last year, suppliers surveyed in Eastern Europe appear equally likely to give their B2B customers more time to settle invoices. Payment from B2B customers is requested by at least 37 days from invoicing, namely three days longer than last year. On a country basis, the payment terms set for B2B customers in Hungary (29 days), Bulgaria (30 days), the Czech Republic (31 days) and Slovakia (33 days) appear to be tighter than those given in Poland (38 days), Romania (40 days) and Turkey (59 days). It is worth noting that Bulgaria stands out in Eastern Europe as the country where payment terms set for B2B customers are significantly shorter than one year ago. This finding, which suggests that Bulgarian respondents have a stronger perception of trade credit risk, is in line with that seen earlier in respect to their sharp aversion to offering customer credit.

The credit management techniques that suppliers surveyed in Eastern Europe appear to use most often are the assessment of the prospective buyer’s creditworthiness prior to any trade credit decision (as reported by 39% of respondents) and dunning activities (outstanding invoice reminders) as reported by 36% of respondents. On a country perspective, the most active in performing both credit quality assessments and dunning activities are respondents in the Czech Republic (68% and 52% respectively) and in Slovakia (57% and 53% respectively). Suppliers surveyed in Bulgaria are the most inclined in Eastern Europe to request payment on cash or on terms other than trade credit from their B2B customers (55% of respondents compared to 32% in Eastern Europe). Turkey follows with 44% of respondents using the same credit management technique. The most likely to self-insure are suppliers interviewed in Romania (40%, which represents twice as many as in Eastern Europe) and Poland (33%).

3 in 5 suppliers surveyed in Eastern Europe do not expect payment practices of their B2B customers to change over the coming months. The most confident in this respect are respondents from Slovakia (81%), whereas the most pessimistic are those from Turkey (21%). Respondents expecting a change in customers’ payment practices, however, appear to be almost equally split, with more respondents anticipating deterioration (21%, highest in Turkey at 48%) than improvement (19%, highest in Bulgaria at 37%). As late payments from customers imply the need to arrange for funds to carry on business operations, 4 in 5 suppliers surveyed in Eastern Europe expressed concern that external borrowing conditions might remain unchanged or become more troublesome over the coming months. The most worried about a more difficult access to bank financing over the coming months are respondents from Turkey (53% compared to 26% in Eastern Europe), while the least concerned are those from Bulgaria (9%). However, should access to bank financing tighten in the short to medium term, suppliers surveyed in the region would offset the expected increase in capital cost chiefly by reducing investment in business growth and workforce, this latter through layoffs or hiring freezes.

The payment practices of customers across all the business sectors surveyed in Eastern Europe (manufacturing, wholesale/retail/distribution and services) improved over the past year, resulting in increased timely payments (73.4% of invoices paid on time compared to 64.3% one year ago). Consequently, suppliers surveyed in the region could significantly shorten their invoices to cash turnaround to an average of 47 days, down from 56 last year. Despite this, an average of 24.1% of the total value of B2B invoices issued by suppliers surveyed in Eastern Europe over the past year remained outstanding at the due date. The hardest hit by late payments from B2B customers is the wholesale/retail/distribution sector. By country and industry, over the past year trade credit risk has significantly deteriorated in the Polish construction and ICT/electronics sectors, followed by the transport sector in the Czech Republic. In Turkey, trade credit risk has significantly deteriorated in the agri-food sector, where over half of the total value of invoices remained unpaid at the due date. 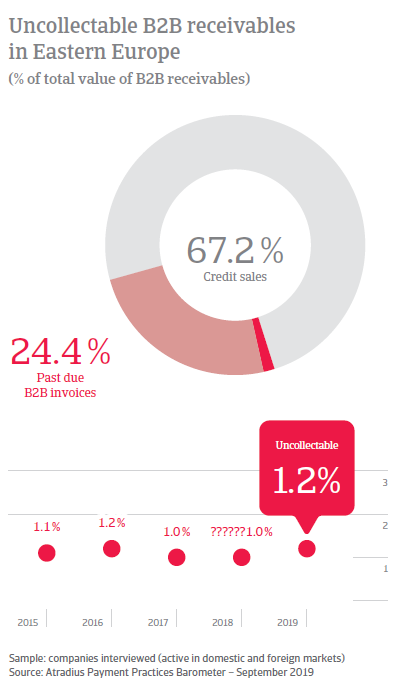 Compared to one year ago, micro enterprises in Eastern Europe recorded the highest increase in the proportion of B2B invoices paid on time (+12% on average). This compares to a +7.8% of timely payments recorded by SMEs, and to no variation in the proportion of invoices paid on time from customers of large enterprises. That said, past due invoices recorded by Eastern European micro enterprises now account for 21.3% of the total value of their B2B invoices, compared to 26.2% for SMEs and 26.0% for large enterprises. In terms of invoice to cash turnaround, micro enterprises appear to be the quickest in cashing past due invoices in (at 41 days down from 49 days last year). SMEs follow at 51 days (down from 59 one year ago), while it takes large enterprises the longest to collect past due payments (at 62 days up from 59 last year). For a detailed overview by country, please refer to the dedicated country reports forming the 2019 edition of the Atradius Payment Practices Barometer for Eastern Europe.

Consistent with being the slowest in collecting payment of overdue invoices, large enterprises in Eastern Europe display the largest proportion of B2B receivables written off as uncollectable, at 2.8% up from 1.3% last year. This increase points to a deterioration of the efficiency in collection of long-term overdue payments over the past year. SMEs and micro enterprises fared better (with 1.7% of 1.3% respectively recorded as write offs). However, last year the proportion of receivables written off as uncollectable was less than 1%.

Financial conditions in Turkey will be tighter in the coming months.

Economic expansion in Bulgaria is expected to lose some momentum in 2019, but should remain strong at above 3%, spurred by robust household spending, strong wage growth and an improving labour market