Despite its proven strength and resilience, mainly due to strong domestic demand, dynamic export flows and a solid business environment, the Polish economy appears to be vulnerable to internal risks stemming from regulatory uncertainty and rising labour supply constraints. These risks are expected to trigger a sizeable 4% upsurge in bankruptcies over the coming months weighing heavily on business prospects.

48.5% of the total value of Polish respondents’ B2B sales was reported to be transacted on credit (up from 30.5% last year). This is well below the 67.2% average for Eastern Europe, and is the second lowest in the region after that recorded in Bulgaria (33.8%). Despite this, the larger proportion of sales transacted on credit by suppliers surveyed in Poland highly likely reflect stronger domestic demand than last year and more dynamic export flows. Despite global trade tensions and the economic slowdown in Germany, Poland’s main export destination, export strength appears to be chiefly sustained by robust demand from the rest of the Eurozone. However, Poland’s export dynamics are expected to progressively moderate this year, contributing to the increase in insolvency levels commented on earlier. 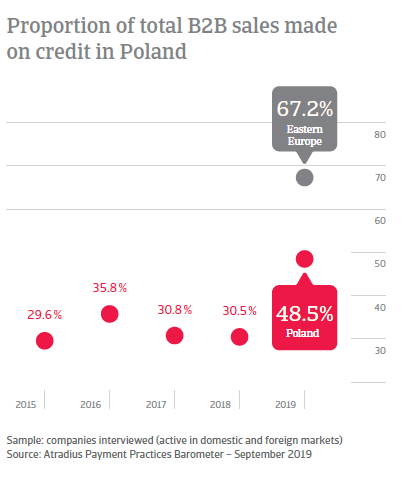 Besides offering trade credit more often than last year, suppliers surveyed in Poland appear equally likely to give their B2B customers more time to settle invoices. Most Polish respondents (88%) granted payment terms averaging 38 days from invoicing (up from 30 days last year). These are the third longest average payment terms in Eastern Europe, after those observed in Turkey (59 days) and Romania (40 days), and compare to a regional average of 37 days.

Consistent with the increased offering of credit to B2B customers, along with longer time granted to pay invoices, credit management policies of Polish respondents focus on protecting the business from the risk of customers’ payment default. The credit management practices that Polish respondents appear to use most often are assessment of the prospective buyer’s creditworthiness prior to any trade credit decision and dunning (outstanding invoice remainders) once the B2B transaction is made (both 35% of respondents).  34% of respondents reported they request payment on cash terms, and 33% reported to have opted for self-insurance. This compares to 20% of respondents in Eastern Europe, and in the region is the second highest percentage of respondents to this question after that recorded in Romania (40%).

Nearly 30% of the total value of B2B invoices issued by Polish respondents over the past year was not paid by or at the due date. Despite an improvement in their customers’ payment behaviour, resulting in an average 7% increase in on time payments (67.4% of invoices paid on time compared to 63% one year ago) Polish respondents need to wait longer than last year to turn overdue invoices into cash (56 days up from 54 days last year). To manage potential cash shortfalls stemming from late payments and reduce financial pressure on the business, 32% of Polish respondents needed to pay their own suppliers late. One in four respondents needed additional financing from external sources. A standout survey finding in Poland is the significant increase in the proportion of write-offs of uncollectible accounts (currently averaging 1.9% of the total value of B2B receivables up from 1 % last year). Despite a strong focus on dunning, as seen earlier, this may point to inefficiencies in collection of overdue accounts, ultimately resulting in lower business profitability.

Most Polish respondents (46%) do not expect payment practices of their B2B customers to change over the coming months. 30% anticipate improvement and 25% expect deterioration resulting in it taking longer to turn overdue invoices into cash. While waiting for payment from customers, businesses need to arrange for funds to carry on their operations. Concern that external borrowing conditions in Poland might become more difficult over the coming months was expressed by 44% of Polish respondents. In their opinion, this would result in significantly higher capital costs, negatively affecting investments in long-term business growth. 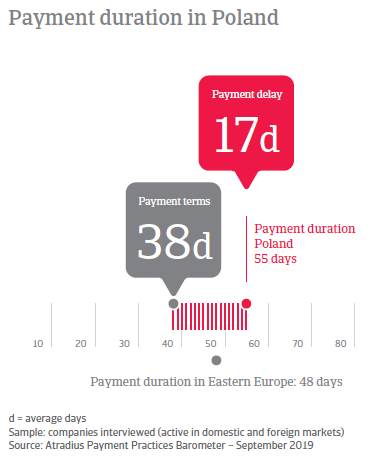 Overview of payment practices in Poland

Trade credit risk is highest in the Polish construction sector

Trade credit risk in Poland has significantly deteriorated in the construction and ICT/electronics sectors, where 32% of the total value of invoices remained unpaid at the due date. Only the consumer durables sector recorded improved speed in customer payments over the past year. There was no change in the credit risk trend in the agri-food, machines, and services sectors.

Proportion of uncollectable receivables is highest in the machines sector.

The machines sector in Poland recorded the highest proportion of B2B receivables written off as uncollectable (3.7%). The agri-food and construction sectors followed at 1.9%. At the lower end of the scale, the consumer durables and the ICT/electronics sectors with an average of 1.5% and 1.3% respectively had the lowest percentage of uncollectables.

Respondents from large enterprises in Poland extended the longest and those from micro enterprises the shortest average payment terms to B2B customers (averaging 45 days and 35 days from the invoice date, respectively).

Large enterprises the swiftest to cash in overdue invoices

Over the past year, large enterprises in Poland recorded the highest increase in the proportion of B2B invoices paid on time (+10% on average). Due to this change, overdue invoices in large enterprises now account for 25.3% of the total value of B2B invoices. Because of this improvement, large Polish enterprises are now the swiftest to collect payment of invoices (55 days compared to 71 last year). Over the past year, average payment duration improved for SMEs as well, which now collect payment on average 2 days faster than last year.  In contrast, micro enterprises are waiting significantly longer to cash in overdue payments, with an invoice to cash turnaround averaging 51 days from the invoice date compared to 33 days last year.

Insolvencies are expected to increase by about 3% in the coming 12 months, mainly affecting car dealers, car part distributors and Tier 2 suppliers.