Vietnam: despite some headwinds the economic performance remains strong, and provides business opportunities for exporter

Vietnam: despite some headwinds the economic performance remains strong, and provides business opportunities for exporters

Some strains in the Vietnam-China relationship

The Communist Party of Vietnam (CPV) remains firmly in power, despite some public discontent over the lack of personal freedom, government corruption and land seizures by the administration. Effective measures against the spread of the Coronavirus pandemic have increased the legitimacy of the government.

The fight against corruption remains a key political issue, and the government has recently stepped up its anti-graft campaign. This has resulted in a flurry of investigations, with arrests and dismissals of higher-ranking officials and executives. With its fight against corruption the CPV aims to bolster its legitimacy, but it also wants improve the business environment in order to attract more foreign direct investment.

The territorial dispute with China over conflicting claims in the South China Sea remains a serious issue in the bilateral relationship for the future. Another issue is the construction of new dams in the Mekong River by China (and Laos), which reduces the flow of essential water to Vietnam.

In order to counter growing Chinese assertiveness, Vietnam is keen to improve its political and security cooperation with the US and Japan. However, despite enhancing its naval forces, Vietnam lacks the military capability to pose a serious challenge to any Chinese actions. At the same time, China is an important and powerful trade partner, which accounts for 17% of Vietnamese exports and 34% of imports (Vietnam´s manufacturing sector depends heavily on raw materials imported from China). Moreover, given the ideological similarities of the regimes in both countries, there is still a strong pro-China faction within Vietnam’s Communist Party.

A robust rebound, with some headwinds on the horizon

After annual growth rates of about 7% in the 2012-2019 period, Vietnam´s GDP growth slowed down to 2.9% in 2020 and to 2.6% in 2021, due to the impact of the coronavirus pandemic. However, Vietnam was one of the few economies in the world that avoided an economic contraction in 2020. Starting from a low level, vaccination rollout gathered pace since September 2021, with about 82% of population fully vaccinated by early July 2022. 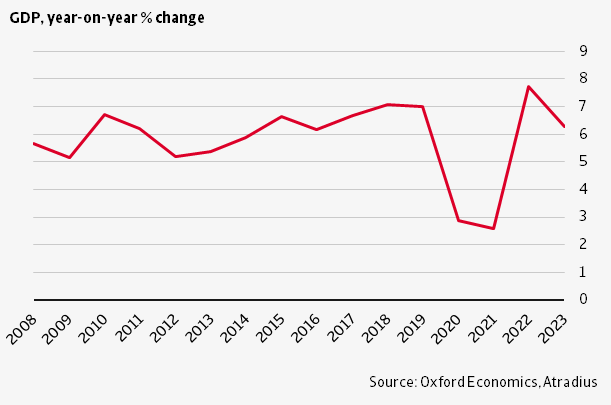 In H1 of 2022 economic growth gained momentum with the rebound of global demand and lifting of lockdowns. Vietnamese GDP increased 7.7% year-on-year in Q2, driven by a surge in manufacturing, which has proven resilient despite supply chain disruptions caused by lockdowns in China. Additionally, services growth has rebounded, as the reopening of borders since April helped to boost tourism, and retail sales recovered.

In 2022 we expect the economy to expand 7.7%, with exports and industrial production growing 15.7% and 19.1% respectively. We forecast investments to increase 12%, while private consumption should grow 7.2%. 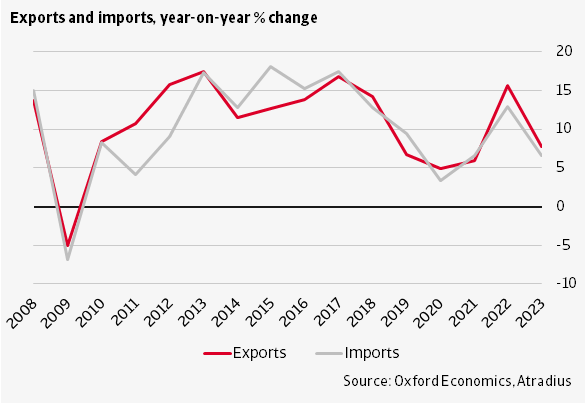 However, we expect more headwinds in H2 of 2022 and into 2023, due to weaker external demand, in particular from the Eurozone and the US. An additional downside risk is the ongoing economic slowdown in China, another main export destination. This will impact manufacturing and export performance, while at the same time global financial conditions have tightened. Therefore, we expect GDP expansion to slow somewhat in 2023, to 6.3%. Export and manufacturing growth should decelerate to 7.7% and 1.2% respectively. However, we expect that private and government consumption remain robust, growing 7% and 6% respectively. 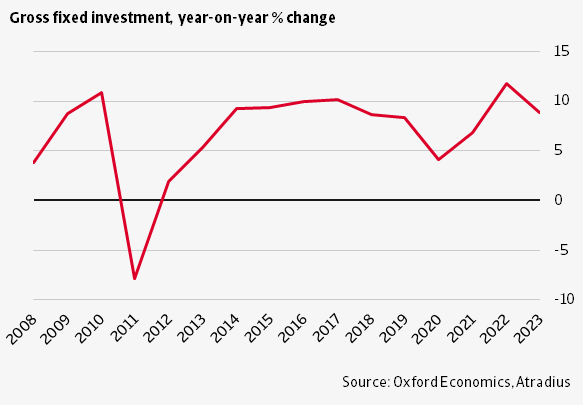 Inflationary pressures have increased due to higher energy and food prices. While the government has taken measures to curb higher commodity prices (e.g. a 2% cut in VAT and reduced fuel taxes), we expect inflation to increase to 3.3% in 2022 and to 3.8% in 2023. However, this would be still below the Central Bank´s targeted 4% cap. Due to the aggressive monetary tightening by the US Federal Reserve and the ongoing rebound of domestic demand, we expect several interest rate hikes in late 2022 and in 2023. 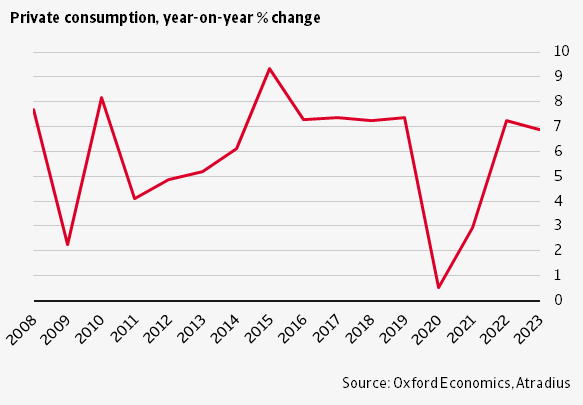 In January 2022 Vietnamese legislators approved a stimulus package worth almost 350 trillion dong (USD 15.4 billion) for the 2022-2023 period, in order to sustain the rebound and to support businesses and households impacted by coronavirus curbs. The package includes a 2% VAT reduction until year-end 2022, corporate tax reliefs, lower borrowing rates for pandemic-affected firms to support lending, funds for the healthcare system and increased infrastructure spending. The fiscal deficit will be 4% of GDP in 2022 and gross government debt amount to 40% of GDP, remaining at a manageable level. So far, the government has had little difficulty in covering its financing requirements through the local bond market and fiscal reserves.

Vietnam's foreign debt structure is stable (long maturities and financed by public creditors over the past couple of years) and expected to decrease further in the coming years. Foreign exchange reserves are sufficient to cover external financing requirements.

In the agriculture sector, demand for pesticides and fertilisers has increased, in order to sustain higher agricultural production and exports. Sales in the retail and consumer goods sectors have picked up again after the lifting of lockdowns, and will benefit from robust private consumption and rising incomes in the coming years. We forecast retail sales in Vietnam to increase by more than 7% annually in 2022 and in 2023. Sellers of equipment and components related to electronics/ICT should benefit from the strong production growth in this industry and ongoing investment. Demand for machines/engineering goods is buoyant due to growth in industrial construction and higher infrastructure project spending. Additionally, the Vietnamese transportation and logistics sector offers business opportunities due to double-digit growth rates in the short-term, fuelled by rising foreign investment, export growth, supply chain shift away from China to Vietnam and growing e-commerce.

Good growth prospects in the medium- and long-term

In the longer run, Vietnam will continue to remain one of the fastest growing economies in the Asia-Pacific region, and a key destination for foreign direct investment (FDI) inflow. The country benefits from a large and skilled labour force and still relatively low wage costs. Vietnam is the main low-cost regional alternative to China for export-orientated manufacturing.

The shift of export manufacturing from China to Vietnam already took off before the Sino-US trade dispute, due to Vietnam’s relatively low production costs, especially in the ready-made garments (RMG) sector. This trend gained momentum since 2019, as the country benefited from trade diversification triggered by the trade conflict. Besides textile production, the manufacturing of consumer goods and ICT products are increasingly shifting from China to Vietnam. The trend to move production away from China has accelerated further, due to the coronavirus-related supply chain disruptions in H1 of 2020 and the recent lockdowns caused by Beijing´s zero-Covid policy.

Supporting factors besides lower production costs are the fact that Vietnam is already part of several value chains and has a strong road, rail and port infrastructure. Strong investment promotion and the existence of special economic zones make Vietnam attractive for companies looking to start new production sites or to expand existing ones. Vietnam´s long-term growth potential should benefit from a progressing (albeit slowly) privatisation process, which also allows an increased foreign ownership of domestic companies. All this should lead to robust investments and exports in the coming years.

A major asset is Vietnam´s participation in several free-trade agreements. The country benefits from its ASEAN membership, in particular the ASEAN Free Trade Agreement (AFTA) and ASEAN´s bilateral trade agreements with other economies in the region. Vietnam is member of the Regional Comprehensive Economic Partnership (RCEP) free trade agreement, which includes 15 Asian-Pacific states, and of the Comprehensive and Progressive Agreement for Trans-Pacific Partnership (CPTPP) with 11 members, including Canada, Chile, Mexico, and Peru.

A major step for Vietnam´s trade policy is the EU-Vietnam Free Trade Agreement, which entered into force in August 2020, and will ultimately scrap duties on 99% of all goods traded between the two sides.

An economic rebound is underway and sectors have recovered, but downside risks persist

Economic disruptions from the war in Ukraine, lingering lockdown restrictions and multi-decade high inflation have generated a new set of adverse shocks for the global economy

The 2022 edition of the Atradius Payment Practices Barometer for Asia reveals a sharp rise in B2B bad debts written off as uncollectable. This represents a threat of liquidity strains for businesses.