Italian chemicals production increased 3.5%, to EUR 55 billion in 2017. Exports, which accounted for 55% of total revenues, grew 9%. Domestic demand increased and expanded across all customer segments, except for construction and consumer durables. The fine chemicals and specialties segments grew 12.7% and 7.8% respectively. 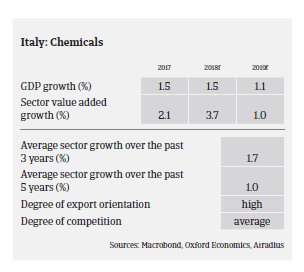 The outlook for 2018 remains positive for the time being, despite a slowdown in early 2018 (in Q1 of 2018 Italian chemicals production grew just 1.5%, below the European average of 1.9% and Italian manufacturing average growth of 4.6%). This slowdown was mainly due to increased domestic and international political uncertainty, impeding higher chemicals purchases.

On average, payments in the Italian chemicals/pharmaceuticals sector take around 60 days. Payment experience is good, and the level of protracted payments has been low over the past couple of years. The level of payment delays and insolvencies is low, and this should remain generally unchanged in H2 of 2018. 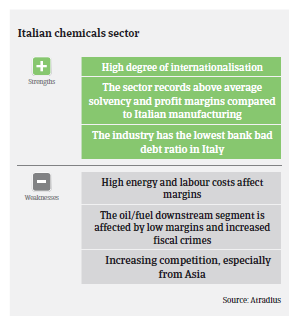 However, we expect non-payments to increase in the oil/fuel wholesalers segment, affected by low profitability due to heavy taxation (VAT amounts to 22% and, together with other excises on fuels, the fiscal burden amounts to 64% of the final sales price of fuels) and international competition. Fiscal crimes (i.e. import of fuel from illegal markets to avoid VAT payments) have increased, while public authorities have started to investigate. In some cases, the bank accounts of companies involved in these crimes have been blocked.

Considering the generally positive outlook for the industry, the low level of bank bad debts and the above-average solvency of many businesses, our underwriting approach to the Italian chemicals/pharmaceuticals sector remains relaxed. However, subsectors and businesses dependent on construction, construction materials and consumer durables still require particular attention. At the same time, any increase in insecurity over the domestic and international economic situation and trade policies remains a downside risk. 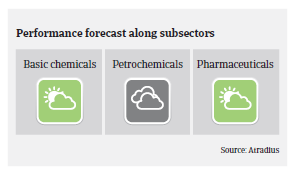 Compared to producers, chemicals/pharmaceuticals wholesalers generally show lower solvency and higher gearing ratios to finance their working capital needs. Due to the issues mentioned above a more cautious underwriting approach applies to wholesalers of fuel products. Wholesalers and retailers of pharmaceuticals, which are dependent on public healthcare expenditure and suffer from long payment duration by public entities and decreased margins, also remain in focus.

Despite a forecast 10% year-on-year decrease in 2018 the number of business insolvencies will still be much higher than the levels registered in 2008.

Due to limited organic growth opportunities and the on-going economic uncertainty, market players strive to expand through acquisitions and specialisation.