After a weak performance in 2019, the Thai economy is facing major challenges this year, as exports and tourism have severely declined 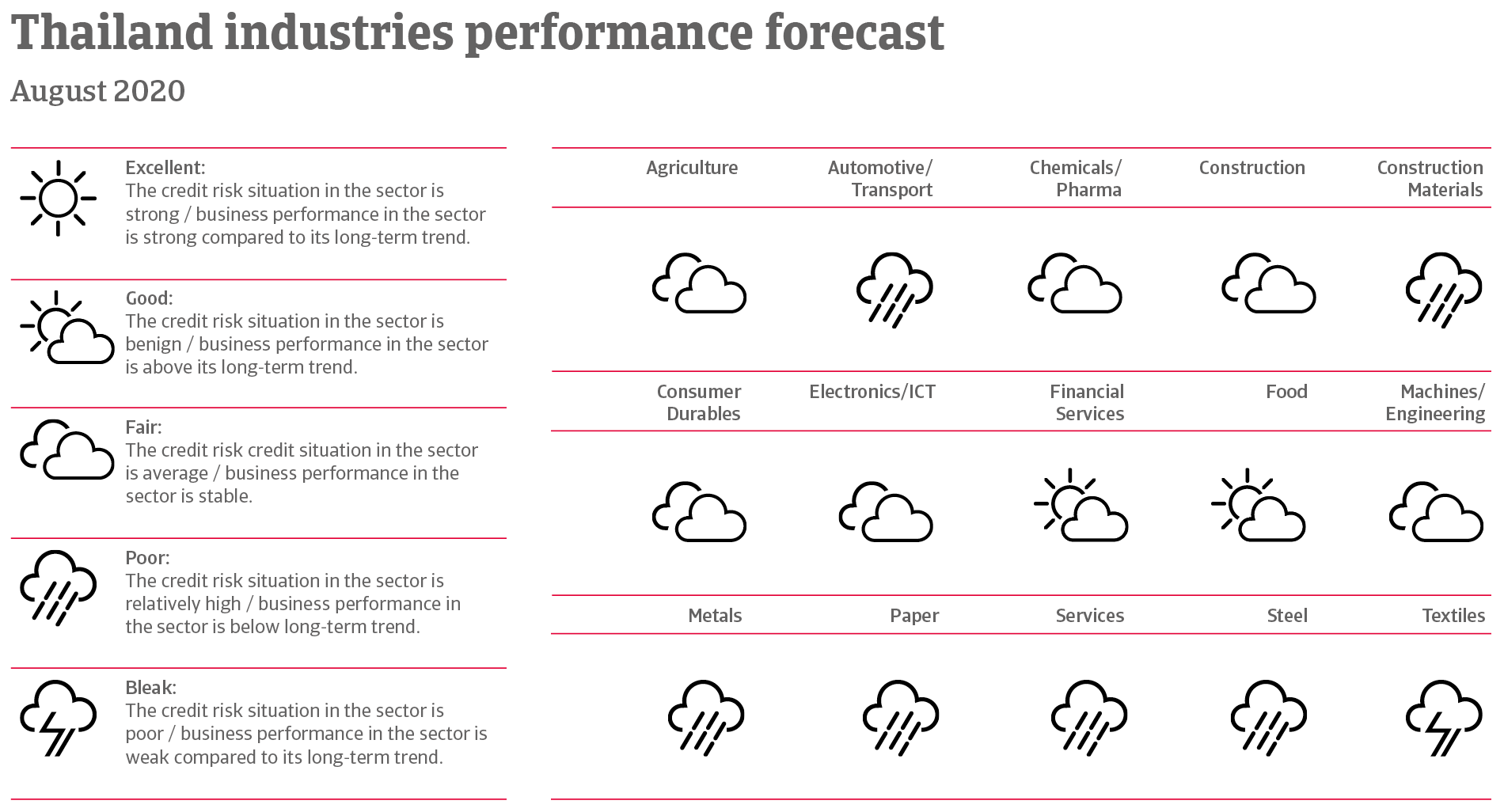 The military holds control for the time being

Despite the formal end of the military government in 2019, the army continues to dominate the new administration. The March 2019 general election resulted in a coalition government led by the military-aligned Phalang Pracharat (PP) party, under the prime ministership of Prayuth Chan-ocha. A Senate entirely appointed by the former junta and a cabinet with several former generals in central posts additionally ensure the dominance of the military.

The political situation remains stable for the time being, but the simmering conflict arising from the deep political, social and economic division between the old establishment (army, judiciary and urban upper class) in the south and the rural poor in the north has yet to be resolved, and is unlikely to disappear soon. Tensions could be exacerbated by the ongoing economic crisis, as both unemployment and poverty are increasing (about 20 million people applied for state aid, and a third of the workforce faces unemployment). Social unrest remains a downside risk should the current economic downturn endure.

A sharp economic slowdown expected in 2020

Thailand´s economy was already showing signs of weakness in 2019, as GDP growth decreased to 2.4%. While household consumption remained robust, growth in fixed investment slowed down. Both industrial production and exports contracted (by 3.8% and 2.6% respectively), due to sluggish global trade, US-China trade tensions, and the strength of the baht.

The global coronavirus pandemic has led to a severe contraction in economic activity since the beginning of 2020, and GDP is expected to shrink 5.7% this year. Exports (mainly electronics and automotive), which are affected by supply chain disruptions and deteriorating external demand, are forecast to contract sharply by more than 16% this year. Industrial production is expected to decrease by more than 10%, with automotive and electronics sectors value added forecast to contract 12% each.

Government measures to contain the outbreak and the standstill of tourism continue to hit domestic demand. Private consumption is forecast to shrink 2.6%, as unemployment is increasing, and a high level of household debt prevents additional spending. The impact of the coronavirus is particularly felt in Thailand’s tourism sector, weighing on growth of services sector. Tourism generates more than 10% of Thailand’s GDP, while Chinese tourists accounted for more than 25% of tourism revenues in 2019. A ban on imcoming passenger flights has been impose in April, and spending by foreign tourists decreased 65% year-on-year.

Fiscal and monetary measures are underway

In order to support the economy, the Central Bank lowered its benchmark interest rate three times in early 2020, to 0.5%. Among other measures, it is also offering special credit facilities and support for bond markets. Between March and April, the government unveiled three stimulus packages, equivalent to about 10% of GDP, including tax deductions for businesses and cash handouts for workers and farmers. In close cooperation with the Central Bank the stimulus also aims to stabilise the financial sector and provide financial assistance to small-and medium-sized enterprises.

Due to low inflation and a large external surplus supporting the baht exchange rate, there is still scope for additional monetary easing. The Thai banking sector is healthy, as banks are well capitalised. The Thai baht is subject to a managed floating exchange rate regime, which reduces volatility risks.

The fiscal deficit will sharply increase in 2020, but government finances remain sustainable. While public debt is forecast to increase to about 43% of GDP in 2020 (34% of GDP in 2019), it is mostly domestically financed, which provides resilience against external shocks. The external debt level is increasing but remains sustainable, while international reserves are at an adequate level, with more than 12 months of import cover.

Issues that could prevent higher growth in the future

Under the assumption that the coronavirus pandemic can be contained in 2020 and the global economy starts to recover, Thailand´s economy is forecast to rebound by more than 7% in 2021. However, there are several issues that could hamper robust growth in the mid- and long-term.

The government will continue to proceed with large infrastructure projects and attract foreign investors with the establishment of special economic zones. However, the economic performance has already been rather disappointing over the last decade. From 2009 to 2019, Thailand’s annual GDP growth rate was 3.6% on average, lagging behind its regional peers like Malaysia (5.3%) and Vietnam (6.5%). Thailand´s high household debt (more than 75% of GDP in 2019) remains a downside risk to the economy, and regional competitiveness has decreased due to a higher wage level (e.g. compared to Vietnam). At the same time, the share of working-age population is forecast to decrease, from 65% in 2020 to 56% in 2040. This would produce a significant drag on economic growth in the long-term.