Shock resistance is strong due to prudent economic and financial policies, but a serious disturbance of global trade by protectionism would hurt exports. 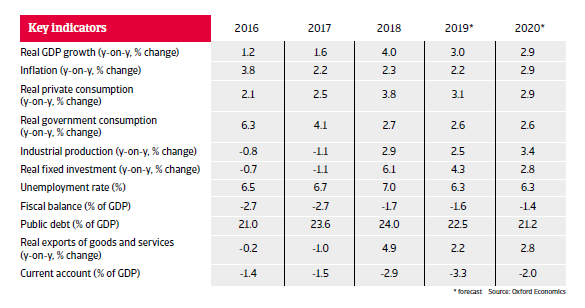 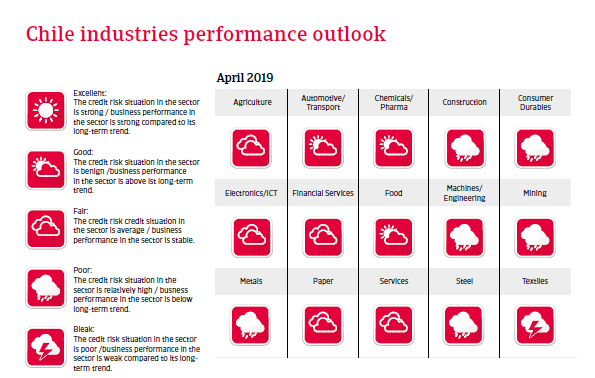 Political stability remains high, supporting Chile´s creditworthiness and positive financial markets sentiment. After winning the 2017 presidental elections Sebastián Piñera of the centre-right “Chile Vamos” coalition took over from centre-left Michelle Bachelet in March 2018. “Chile Vamos” has no majority in Congress, which makes it harder to pass a proposed tax reform in order to modernise and simplify the current tax and pension systems. Addressing bottlenecks in human capital and social inequality are persisting challenges for the administration.

Chile´s economy remains dependent on copper exports (accounting for more than 40% of export earnings and 10% of GDP) and subsequent demand from China. However, dependence of government revenues on copper earnings has decreased from more than 25% in the past to about 10%, and more diversified export destinations have mitigated trading risks. Meanwhile, the service sector accounts for more than 60% of GDP. 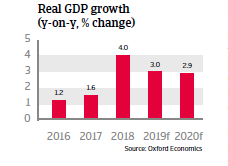 GDP growth rebounded in 2018, driven by higher prices for copper as well as increased exports and investments. In 2019 and in 2020 economic expansion is expected to remain robust at about 3% p.a. Inflation is forecast to remain within the Central Bank´s target range, reflecting a strong macroeconomic policy framework. Chile´s banking sector is healthy, well-regulated and sufficiently capitalised, with low non-performing loans (about 2% on average). The Chilean business environment remains one of the best in the region and the government continues to stimulate foreign investment. Good access to foreign and domestic capital by local companies reduce refinancing risks.

The economy´s shock resistance remains strong, given prudent macroeconomic and financial policies. A flexible exchange rate serves as an effective shock absorber, mitigating the impact of copper prices and external demand volatility on Chile´s current account. External debt is sustainable (with ratios expected to decrease to about 60% of GDP in 2019) and liquidity remains sufficient with more than six months of import cover. Sovereign wealth funds amounting to some USD 24 billion provide an additional cushion against external shocks.

The trade dispute between the United States and China has not yet hurt the economy, due to Chile’s relatively solid finances and the flexible exchange rate. However, any serious disturbance of global trade flows by additional protectionist measures would definitely affect Chilean exporters, despite the fact that the country has bilateral and multilateral free trade agreements with more than 60 countries.

The first increase in US interest rates in almost 10 years may lead to trouble in emerging markets.