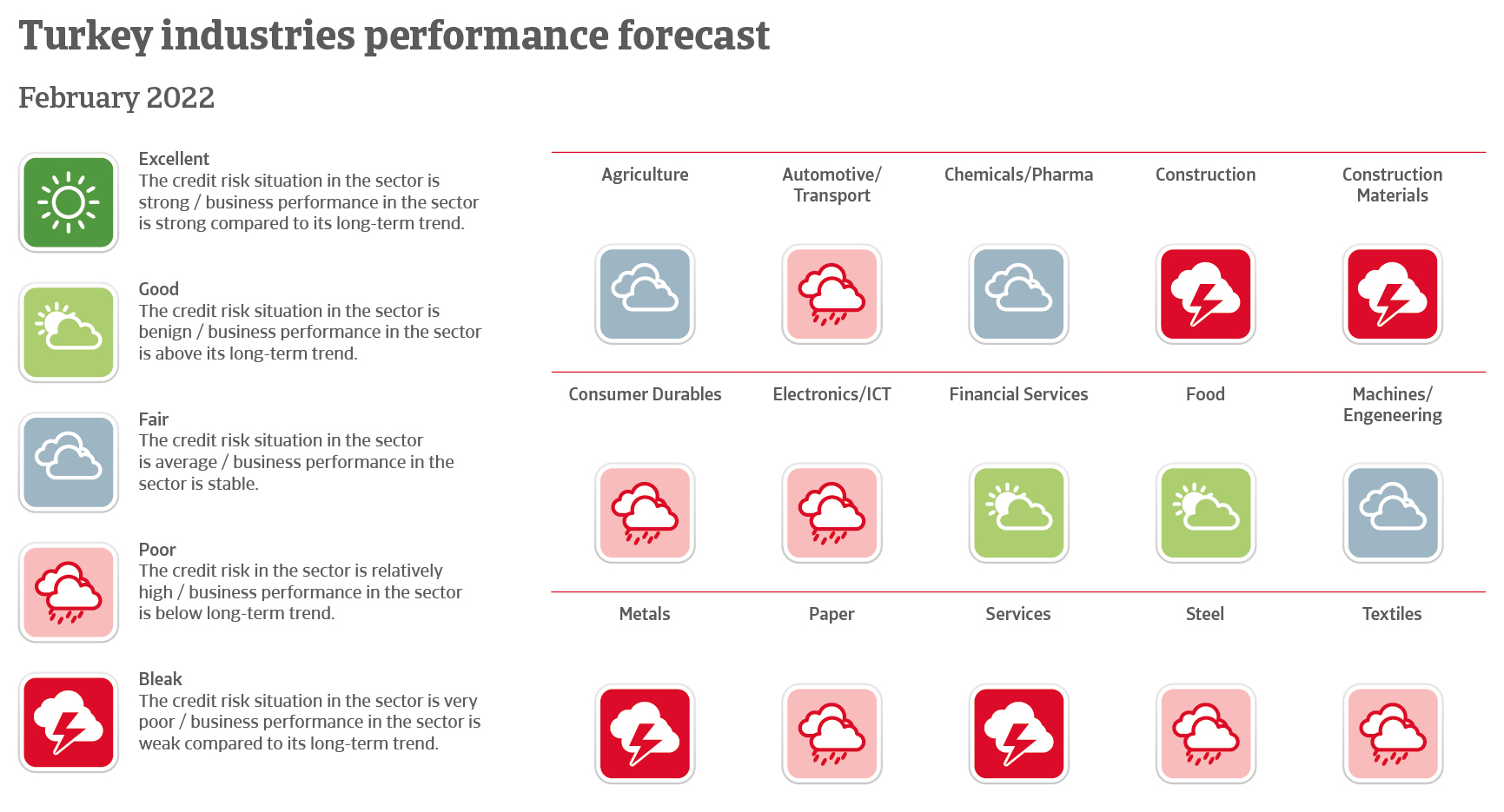 A process to improve relations with several countries is underway

Domestic and regional political issues will continue to impact Turkey’s economy, in particular investor sentiment and the exchange rate. The south-eastern part of the country remains affected by the civil war in Syria and cross-border interventions by the Turkish army.

Over the past couple of years, Turkey has adopted an increasingly assertive foreign policy in order to establish itself as a leading power in the Mediterranean and the Middle East. Besides engagement and military incursions in Syria and Iraq, Ankara has set up a military base in Qatar, intervened in the civil war in Libya, supported the Azerbaijan forces in their armed conflict with Armenia, and sent gas exploration ships into contested areas in the Aegean Sea, where Turkey has overlapping maritime claims with Greece and the Republic of Cyprus. Together with other issues, this has led to strained relations with the EU.

However, in 2021 Turkey has started a process to normalise relations with several countries in the Middle East, in particular with Egypt, Israel, Saudi Arabia and the UAE. After years of animosity, talks with Armenia have started in order to improve ties and to strengthen economic cooperation in the South Caucasus.

A strong economic rebound in 2021

Due to a surge in coronavirus cases, the Turkish government imposed a temporary lockdown end of April 2021. The number of fatalities declined after peaking in May, and most pandemic-related restrictions ended in July, which provided support for the domestic economic recovery.   Currently we do not expect a re-imposition of strict restrictions in the coming months. The vaccination rollout in Turkey was fast in the first nine months of 2021, but has lost some momentum since then. End of January 2022 68% of the population received at least one dose, and 62% were fully vaccinated.

The Turkish economy expanded 10.3% in 2021, driven by expansionary monetary, credit and fiscal policies introduced in response to the pandemic, and a rebound in export demand. Private consumption and investments increased 11.7% and 6.4% respectively, while exports grew a whopping 22.4%.  Earnings in the tourism sector doubled compared to 2020, to USD 25 billion.

However, in 2022 GDP growth is expected to slow down to 2.5%, followed by a 2.6% expansion in 2023. A comprehensive (and premature) monetary policy loosening led to a sharp lira deprecation end of 2021, which in turn has caused inflation to soar, peaking at 48.7% in January 2021 – a 20-year high. Persistent high inflation (expected at 37% in 2022) and higher rollover costs of subsidised loans stretch household budgets. Private consumption will expand by only about 3% this year, while investments are expected to contract by 2.5%. However, export growth should remain robust at more than 9%. That said, a further lira depreciation would weigh on consumers and businesses alike.

The sharp lira depreciation end of 2021 increases the burden of companies with large exposure to foreign currency denominated debt. Despite continuous private sector deleveraging since the previous currency crisis in 2018, the external debt service burden remains elevated.Many businesses pay high interest rates for loans and struggle with the impact of the weaker local currency value on foreign debt repayments.

The weak lira also increases the credit risk for businesses that operate in import-oriented sectors, while lacking export or foreign currency revenues. Producer prices have started to increase, with energy-intensive industries and sectors depending on commodities and component imports mainly affected. However, we expect that export-driven industries will continue to grow in 2022. Automotive value added output is expected to increase 7.5% after a 13.5% expansion in 2021. Chemicals will grow by only 2.5% this year, as the sector is impacted by high commodity prices and increased input costs. High inflation and lower household consumption will affect the retail and domestic appliances sectors, which are forecast to shrink by 0.1% and 2.2% respectively. after double-digit growth rates last year. Service sector growth will also be affected, forecast to increase by less than 1%.

The Turkish lira exchange rate already showed considerable volatility in 2018 and 2019, and large capital outflows from emerging markets in Q1 of 2020 led to a sharp depreciation. Depreciation pressure continued in the following months, as loans were provided at interest rates below the inflation rate in order to stimulate the economy with cheap and large amounts of credit.

This proved to be unsustainable, and in order to avoid a currency depreciation-high inflation loop, the Central Bank adopted a more orthodox monetary policy stance, and tightened the benchmark interest rate several times until March 2021. However, in the same month President Erdogan dismissed the governor of the Central Bank - the third dismissal in less than two years, raising serious doubts over the Central Bank’s independence. Credibility of Turkey´s economic policies and investors´ confidence was shaken again.
With the aim to support credit growth and to spur investments, government and the Central Bank reversed the monetary policy again. Since September 2021, the interest rate was cut by 500 basis points to 14%, disregarding an ongoing rise in inflation. This turned the real interest rate deeply negative. As a result, the Turkish lira depreciated sharply against the USD in 2021: by 45% since the beginning of the year, and by 38% since September 2021.
In order to avoid a full-scale currency crisis, in December 2021 the government launched a scheme to encourage the switching of foreign-exchange deposits into exchange-rate-protected Turkish lira deposits. Additionally the central bank intervened in the foreign exchange market for the first time in seven years in order to support the plunging lira.

Despite those measures, it seems that only a return to more orthodox monetary policies could reduce the current price and financial stability risks. However, the chances for such a shift in the near future are rather low.

Banking sector remains resilient for the time being, but also susceptible to currency volatility

The capitalisation of Turkey´s banking sector remains strong, with a capital adequacy ratio of 18%, but we expect asset quality and profitability to decrease. Higher funding costs, cheap outstanding loans and the need to provision for risky loans will curtail profits.
On the positive side, the relative stickiness of deposits in the Turkish banking system reduces the outflow risk, associated with the high dollarization of deposits of more than 50%. In addition, the banking sector's available foreign-currency liquidity is sufficient to meet its short-term foreign currency debt obligations.

However, at the same time the sector is vulnerable to adverse impacts of exchange rate volatility on capitalisation, asset quality and refinancing (given short-term foreign-currency financing). The banking sector has increased its exposure to the sovereign via government debt holdings and foreign exchange swaps with the Central Bank. While the non-performing loan (NPL) ratio appears to be low and stable (3.2% in November 2021), this is mainly due to a lenient treatment of debtors and continued relaxation of loan classification rules.

The direct fiscal response to the coronavirus pandemic has been modest, as the emergency stimulus was mainly credit-driven. ‘On-budget’ measures amounted to only 3.5% of GDP in 2020 and 2021, focussing on employment support and tax deferrals.
The sharp exchange rate depreciation has led to a deterioration of government finances, as more than 50% of government debt is issued in foreign currency (up from less than 40% in 2017).

Therefore, the government has to tighten fiscal policy in order to regain policy credibility and to reassure investors. A further increase in indirect taxes, a restructuring scheme for tax payments and a rise in corporate income tax to 25% should benefit public finances. We expect annual budget deficits of more than 3.5% of GDP in 2022 and in 2023, as public spending is likely to increase ahead of the June 2023 elections. Public debt is forecast at 39% of GPD in 2022, still low compared to international standards, and to decrease slightly in the coming years.

The current-account deficit decreased from 5% of GDP in 2020 to 2.5% of GDP in 2021 as the trade deficit narrowed, while the services surplus increased due to the partial recovery in tourism. In 2022 the current-account deficit is expected to widen somewhat, in particular if the expected rebound in tourism rebound would be affected by the spread of the Omicron variant. The gross external financing need remains large, estimated at USD 217 billion in 2021, three times the size of Turkey’s international reserves. Foreign reserves were drained in 2020 and H1 of 2021 by the Central Bank’s failed attempt to stabilize the lira exchange rate.

However, reserves left to support the lira exchange rate remain limited, and uncertainty about Turkey’s monetary policy complicates its access to international capital markets. This means that the sovereign increasingly relies on domestic financing (with support from the Central Bank).

Without comprehensive reform efforts beyond fixing short-term issues, the future earning capacity of the Turkish economy remains constrained by macroeconomic imbalances related to credit growth, high inflation and a large external deficit. This is coupled with structural issues related to its low savings rate and weaknesses in competitiveness, limiting FDI inflow. Without structural reforms to raise savings, reduce dependency on energy imports and improve the investment climate, Turkey’s potential growth rate will decrease to 3.0%-3.5% per annum in the long-term, which is not enough to absorb the increase in the working age population of about one million people per year.

Economic growth in the oil-rich Gulf region is outpacing that of its energy-importing neighbours. Petrodollars give an extra boost to the economic rebound in MENA.

While the global economic recovery from the pandemic is bumpy, we identify five bright spots for export opportunities

Amsterdam 25 January 2022 – The strong rebound in GDP across most of the world may prove to be more of a bounce than a movement.