The economy is forecast to grow about 5% this year. The scope of recovery in Europe as Morocco’s main export market is playing a pivotal role.

The economy is forecast to grow about 5% this year. The scope of recovery in Europe as Morocco’s main export market is playing a pivotal role. 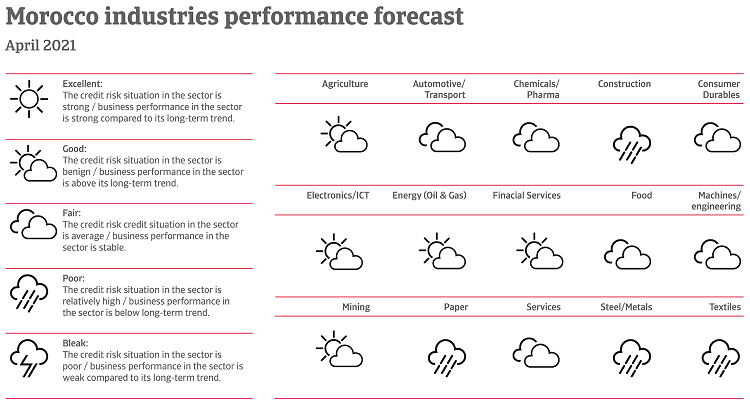 The political situation is rather stable, with King Mohammed VI holding most political power in his hands, while the powers of the parliament and government are limited. There is no immediate threat to the monarchy and the establishment, as the King is popular with the people.

The next parliamentary elections are scheduled for September 2021. The current 12-party coalition government is highly fragmented. The normalization process with Israel remains controversial and has led to the resignation of various members from the main coalition party, PJD. Despite increased support for the opposition, the conservative Islamic-democratic PJD is likely to remain the largest party in parliament after the elections.

Social tensions have increased since 2017 due to lingering problems (such as high youth unemployment, urban-rural divide, income inequality, limited access to health services and corruption), periodically sparking protests in less developed parts of the country. The issues of income inequality, poverty, education and healthcare have become even more prominent during the coronavirus crisis. So far, the king has always managed to smooth the situation by replacing ministers, increasing social spending and launching a long-term development plan. While it is not expected that social dissatisfaction will undermine political stability, higher social spending in order to contain protests is likely to strain public finances.

Morocco remains vulnerable to the threat of Islamic extremism. Moroccan fighters returning from Libya and Syria are of particular concern for the authorities. However, the country has not been hit by major terrorist attacks over the past few years. Preserving security is very high on the government’s agenda, given the importance of tourism revenues for the economy. Another security issue is the conflict in the Western Sahara between Morocco and the Polisario Front, with fighting recently breaking out again, ending a 29-year old ceasefire.

With a 7% GDP contraction in 2020, the Moroccan economy was hard hit by the coronavirus pandemic. Far-reaching local lockdown measures hampered domestic economic activity, while exports decreased a whopping 15%, with tourism (which accounts for 12% of GDP) severely impacted. Unemployment increased from 9% in 2019 to 12% in 2020.

Additionally, a lasting draught weighted on the agriculture sector (which employs about 40% of the Moroccan workforce and accounts for about 15% of GDP). That said, the phosphate-mining industry (which accounts for 9% of GDP) held up well, with exports increasing by 4% in 2020.

This year, the economy is forecast to rebound by about 5%, contingent on the gradual easing of lockdown measures, an effective vaccine rollout in H2 of 2021 and more benign weather conditions supporting agriculture performance. Private consumption is expected to rebound by more than 8% this year. Industrial production is forecast to increase 8%, and work on infrastructure improvement projects (roads, ports and railways) has resumed.

A major factor determining the pace of the rebound will be the scope of recovery in Europe, Morocco’s main export market. Aeronautic and automotive goods accounted for 40% of exports in 2019 and remain potential key growth drivers. However, they suffered last year from deteriorated Eurozone demand. About 90% of Morocco’s cars and car parts are exported, of which 80% go to Europe. A new automotive factory by a large French OEM in the city of Kenitra will increase vehicle production capacity by 50% in 2021, likely giving a boost to exports.

While exports of goods and services are forecast to grow by almost 9% in 2021, recovery in the tourism sector will remain muted for the time being, highly dependent on economic growth and the lifting of travel restrictions in Europe.

The banking sector is reasonably healthy, but deteriorating asset quality is a downside risk

The Central Bank has almost doubled the liquidity provision and cut the benchmark interest rate to 1.5%, which helped to sustain credit growth. So far, the banking sector has weathered the economic downturn relatively well. However, the non-performing loan (NPL) ratio rose by 1 percentage point in 2020, to 8.5%. It could increase further this year, due to the lagging effect of the expiration of moratoria on credit repayment.

The elevated NPL ratio is mainly due to the exposure of Moroccan banks to markets in Sub-Saharan Africa. Although provisions have been made for almost 70% of bad loans, and the largest banks have substantially raised provisioning levels recently, the banking sector’s pre-crisis capitalization ratio (15.6% at the end of 2019) seems to be somewhat low, given the asset-side risks.

Over the past couple of years, the tax base has barely broadened (21.5% of GDP), and fiscal discipline declined. Due to the pandemic, in April 2020, Morocco had to draw on the funds available under a precautionary and liquidity line (PLL) with the IMF for the first time. The funds, worth about USD 3 billion, have been used to cushion the economic and social repercussions.

In order to sustain the economic recovery, the government has topped up its special pandemic fund (worth 3.1% of GDP) with more credit guarantees for firms (6.5% of GDP) and announced the creation of a fund to support private-sector investment (3.9% of GDP). The additional expenditure on coronavirus crisis-related measures and declining revenues caused the fiscal deficit to increase to 7.6% of GDP in 2020, with another 7% of GDP deficit forecast for this year.

Public debt is forecast to increase to 98% of GDP in 2021 (83% of GDP in 2019) – well above the critical threshold of 70% of GDP for emerging economies. There are substantial contingent liabilities related to state-owned companies and credit guarantees to private sector businesses.

The profile of public debt supports sustainability its for the time being. A large share (about 75%) is domestically financed against local currency, reducing exchange rate risk. At the same time, about 70% of external public debt is financed by bilateral and multilateral creditors, limiting refinancing risk. Moreover, the weighted average debt maturity of 7.5 years indicates that financing is mostly long-term.

Despite the currently still favourable profile of public debt, its high level remains a concern for the future, as the resumption of fiscal consolidation after the pandemic will be gradual at best. The planned staged implementation of universal health coverage, as well as pension and unemployment insurance, will extend social spending pressure in the coming years. The need to contain any social discontent with subsidies and higher social spending will keep budgetary pressures high.

The external position has proved to be resilient, but external funding costs could increase

Morocco’s external economic position is acceptable, with a reasonable foreign debt level of about 54% of GDP in 2021. Although financing pressure forced Morocco to tap into its PLL with the IMF, external liquidity risk remains contained. As a result of easy access to additional foreign financing from official creditors and several international bond issues (for a cumulative USD 4.2 billion), international reserves increased by more than 35% in 2020. In 2021 international reserves will amount to more than 9 months of imports and 180% of Morocco’s gross external financing requirement. The Moroccan dirham is pegged to a currency basket of EUR (60%) and USD (40%). Recommended by the IMF, the plan is to move to a more flexible exchange rate in the medium-term, in order to protect the Moroccan economy better against external shocks and to improve its international competitiveness.

While the external debt level is not very high and debt-service payments have remained manageable, external funding costs could rise if external credit ratings continue to deteriorate, triggered by the sizeable increase in government debt.

Traditionally a leading producer of agricultural products and phosphates, Morocco has made structural reforms to diversify its economy by developing industrial manufacturing, especially export-driven sectors (cars, aeronautics and electronics), and to provide a favourable investment environment (tax breaks have attracted many investors). Ongoing and planned large projects to improve the infrastructure (roads, ports and railways) bolster the business environment, and the geographical proximity to Europe is another asset. Morocco is a strategic hub for trade and investment between Europe and Africa.

Low unit labour costs and a slightly undervalued currency enhance Morocco’s competitiveness. Between 2000 and 2019, GDP per person increased by 70% in real terms.

As a net oil importer, Morocco is still vulnerable to higher oil prices. However, with large investments in renewable energy the country´s dependence on energy imports is decreasing. Morocco already sources about 35% of its power from renewables, especially from concentrated solar power, and aims to increase the share of renewable energy to 50% by 2030.

As several vaccines have been approved and are being rolled out, we expect the global economy to rebound in 2021

After the Covid-19 pandemic sent a shockwave to the global economy, we are looking at new hope as economies are gradually reopening