Rebalancing of the Chinese economy is at the forefront of many policy debates, because of the impact it will have on the Chinese economy itself, but also on the global economy. In this article, we will be focusing on the why and how of China’s change in growth strategy. We will argue that the progress on rebalancing is still limited and that risks have mounted due to the credit-intensive nature of investment growth in recent years.

Why China wants to rebalance

For decades, China’s growth has been driven largely by investments and export. It managed to maintain high GDP growth of 10% per year for almost three decades. Now China is the second-largest economy in the world measured in current dollar value and the largest in dollar PPP-adjusted terms. China’s growth policy was supported by the movement of huge numbers of workers from the countryside to the towns and cities, allowing strong growth in urban employment with modest increases in wages. Its export-oriented policy was supported by an undervalued renminbi, which was pegged against the dollar. Its accession to the World Trade Organization (WTO) in 2001 turned it into a major assembling hub. China nowadays has a global export market share of 6.8%. This means it exerts a strong influence over world trade movements.

The current Chinese growth model is not sustainable. Therefore, there has been a shift in thinking in the Chinese leadership about how future growth should be attained.  A major objective is that it wants to transition to a more sustainable growth path, with consumption becoming the main growth driver and investment slowing. The Third Plenum meeting of the Central Committee in 2013 was an important milestone for reform-making. The overarching idea of the reforms proposed in 2013 was that the market should play a greater role in the allocation of resources while conceding an important influence for the government on the management of the economy. The plans also expressed ambitions of liberalizing exchange rates, interest rates and the capital account.

There are several reasons as to why China wanted to change its growth strategy. In China, some 45% of GDP is devoted to fixed capital investment, a level well above its East Asian neighbours in their high growth periods. This does not mean that there is a lack of investment opportunities - China’s capital stock per worker is still significantly below that in advanced countries (it is 30% below the US level). However, there are clear signs that investment has been going to less efficient uses.

One way to see this is to look at total factor productivity growth, which is a measure of an economy’s long-term technological dynamism. Chinese TFP growth has been levelling off, reaching close to 0% in 2013. The productivity slowdown was in part the result of overinvestment and excess capacity in a number of important industries, in particular the construction sector and upstream industries such as steel, cement and coal. Investments in China in recent years have largely been credit driven (as opposed to coming from retained earnings). This has raised concerns that part of these loans will not be commercially viable and need to be written off. In recent years, there are signs that this is increasingly happening. 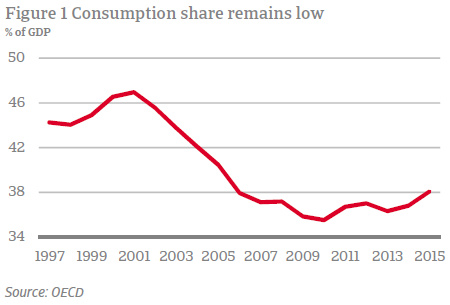 Another reason for the change in growth strategy was that investment-driven growth impeded the growth of personal consumption. China’s consumption share in GDP has declined gradually over past decades. The share of household consumption in GDP reached a low of 35.5% in 2010 and has increased only slightly afterwards (Figure 1).

China’s consumption share is lower than even some of its poorer neighbouring countries. For instance in India, the consumption share is 59.7%, despite the fact that India has a much lower GDP per capita (only one fifth of that of China). In the US, the consumption share is even higher (68.8%). Growing private consumption is seen as a way by the Chinese authorities to generate employment growth and reverse growing income inequality. At an estimated 46.9%, the Gini coefficient in China is relatively high by international comparison (it ranks 28th in a list of 145 countries).

A final reason for deciding on a change in growth strategy is the detrimental effects that energy-intensive investment growth has had on the environment. China is the world’s largest emitter of greenhouse gases and has a number of cities with very bad air pollution. Lowering capital-intensive growth should lead to a reduction in emittance.

To see how far rebalancing has progressed, one can begin by looking at GDP and the contributions of the different spending components. In all economies the expansion of GDP is the sum of growth of consumption (private and government) plus investments plus net exports of goods and services. GDP growth in China has levelled off from 10.7% in 2010 to 6.9% in 2015. Moreover, a strong case can be made that these official figures are overstating the actual growth rate.

After the global financial crisis of 2008, GDP growth was more or less evenly driven by consumption and investments. However, in 2011 consumption overtook investment as the primary source of growth. Real wage growth is allowing for a larger portion of GDP to be spent on consumption. The share of household consumption in GDP went up from 35.5% in 2010 to 38.1% in 2015. While growth has become less investment-driven in recent years, the share of total investments in GDP remains high at 45%. 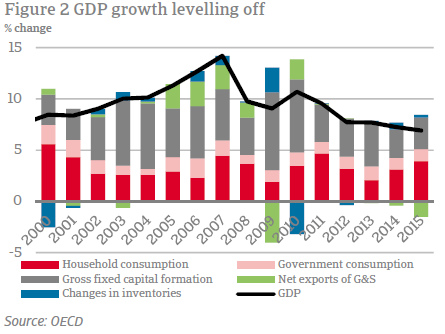 On the supply side, the size of the secondary sector (industry) relative to the total economy has declined over the past couple of years, whereas the tertiary (services) sector has increased (Figure 3). Hence, an increasing portion of growth is driven by the services sector. This fits the demand side story, as a more consumption driven economy will have less demand for heavy industrial goods, and increasing demand for consumer goods, including services. Higher demand for services is a sign that China is growing more developed and is moving up the global value chain. 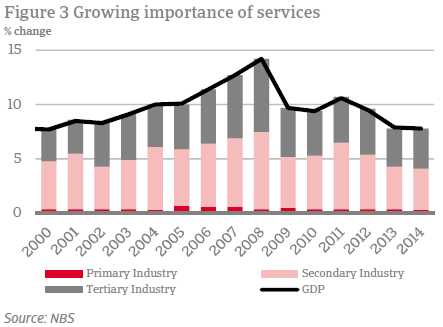 The trade balance (exports minus imports) in China declined in recent years, after reaching a peak of 8.6% in 2007. Over the past four years, it has been hovering in the range of 2.4 to 2.7% of GDP. Both export and import growth have levelled off since 2010. China’s role as a global assembling hub means that exports and imports move in tandem.

Closely related to the trade balance is the current account. After peaking at 10% in 2007, the current account surplus first decreased considerably, due to the global financial crisis of 2008. After 2013, the current account balance recovered gradually (reaching 2.8% in 2015), reflecting mainly an increase in the goods trade balance. The services balance declined, and has turned negative even since 2008, due to growing demand for services, which was also visible on the supply side.

China has made a number of steps in liberalizing the exchange rate and opening up the capital account. In 2005, the peg of the Renminbi (RMB) from the US dollar was lifted. The RMB is now moving in a managed float. In December 2015, the People’s Bank of China signalled that it was managing the RMB’s exchange rate within an undisclosed band against a basket of currencies rather than against just the US dollar. On the other hand, it also claims to be committed to exchange rate liberalization. On 1 October 2016, the RMB was formally recognized as a global reserve currency by the IMF. It is also increasingly opening up its local bond and stock markets to foreign investors. However, the central bank continues to intervene in the currency market and to exert strict control over capital outflows. 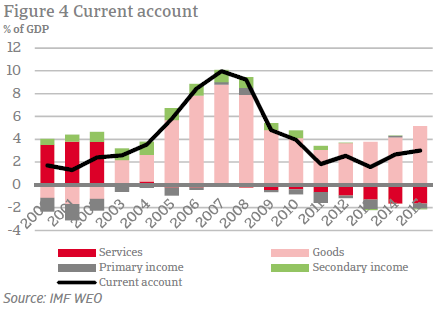 What is clear from the above is that the progress towards rebalancing is still limited on some key indicators. It is fair to say that consumption has become a more important growth driver in recent years. However, the consumption share in GDP has not increased to a great extent since its 2010-low, especially given the substantial decline in the period before. The contribution of investment to economic growth has declined in recent years, but the investment share in GDP remains very high in an international perspective. The most progress with the Third Plenum reforms was made on non-economic reforms, such as the government’s anti-corruption campaign. Also, some progress was made in liberalizing the exchange rate and opening up the capital account.

Investment growth has been increasingly credit-driven and is going to less efficient uses. The most troubled are state-owned enterprises (SOEs). These have reported higher and faster rising leverage compared to the private enterprises, and significantly weaker profitability. It is not so much the size of China’s total debt which creates this risk, but its high growth rate. One way to see this is to look at the so-called credit gap: the difference between actual debt-to-GDP and the long-term trend of debt-to-GDP (Figure 5). The credit gap reached 30.1% over the first quarter of this year, much higher than what is thought to be sustainable. The current pace of credit expansion is reminiscent of pre-crisis behaviour in countries like Thailand and Spain. 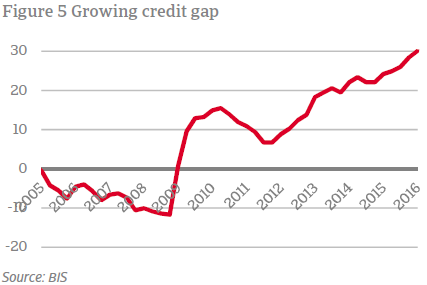 The credit-driven investment rise in China was made possible by high household savings. There is a clear reason why Chinese households are such big savers. Given the lack of a developed health care and pension system, Chinese households are forced to self-insure. The Chinese regime has kept interest rates artificially low, effectively forcing households to save against negative real interest rates. In the past, households have responded to lower real interest rates by setting aside an even higher share of disposable income. In other words, they are considered to be ‘target savers’. This system is very inefficient, as saving for old age individually (without longevity risk being shared) pushes many households to save more than is necessary to enjoy a good pension.

To tackle the issue of debt overhang, Chinese authorities would need to take measures that further the process of rebalancing. This can be done through supply-side measures, by extending social welfare and creating a lower necessity for households to save out of a precautionary motive. If the savings rate goes down, the debt problem is alleviated as well. A demand-side approach would warrant include measures to reduce overcapacity in certain industries and cover associated losses in the financial system. Authorities are making some progress in the right direction, by addressing overcapacity in industries such as coal and steel. However, a more comprehensive and centrally-led approach is needed.

China has taken some steps towards rebalancing its economy, but overall progress is limited. Consumption as a share of GDP has increased slightly, but is still very low, while investment remains the primary driver of growth. The absence of a developed social welfare system keeps the savings rate high and prevents consumption from picking up further. Most progress has been made through non-economic reforms, such as anti-corruption measures. Significant steps have also been taken in opening up the capital account and lifting the peg of the renminbi. While policymaking thus far has avoided a hard landing, it has failed to effectively address the rising debt levels which continue to put a brake on GDP growth.

Economic growth forecast to slow down to 6.3% in 2016, but no hard landing expected for the time being.

A closer look at corporate debt in EMEs

Atradius explores how rising corporate debt in EMEs affects corporate creditworthiness and identifies the most exposed countries and vulnerable sectors.