Due to the more difficult market environment and decreasing sales, we have recently downgraded the sector performance outlook from “Excellent” to “Good”. 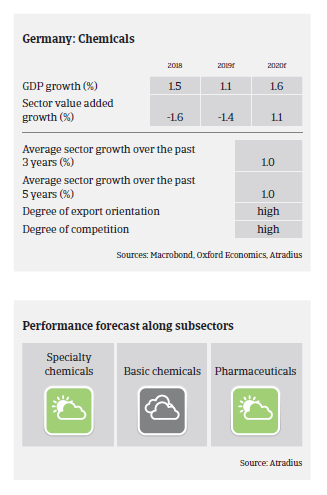 This forecast decline is mainly due to lower economic growth in Europe, coupled with  less demand from key buyer industries (such as automotive). Additionally the sector is affected by higher insecurity in the global economy over the repercussions of protectionism (e.g. the Sino-US trade dispute and the threat of potential US tariffs on car imports from the EU). At the same time, international competition is increasing for German chemical businesses, mainly from Asian producers constantly climbing up the value chain (e.g. higher knowledge in the special chemicals segment).

Generally, German chemicals and pharmaceuticals businesses have robust equity, solvency and liquidity. However, pressure on profit margins of German chemical businesses is expected to increase, due to a more volatile economic cycle and increasing international competition. In global comparison labour, energy, commodity costs and regulatory standards are high.

The German chemicals sector’s payment behaviour has always been better than average with no notable payment delays. Payments take 45 days on average, even fewer for domestic payments, as most chemical products are exported to destinations with longer payment terms than the domestic market. We have seen no major change in payment behaviour or increase in notifications of non-payment in the last six months, and this trend is expected to continue in the coming months. The insolvency environment is stable, with insolvencies expected to remain at a low level.

Due to the still benign credit risk situation our underwriting stance for this sector remains generally relaxed, with normal external monitoring and buyer reviews. However, due to the more difficult market environment we have recently downgraded the sector performance outlook from “Excellent” to “Good”.

Despite further sales growth most businesses continue to operate on very tight margins due to fierce competition, while equity strength is below average.

Many smaller construction companies have weak equity ratios and limited financial scope, which makes them vulnerable to payment delays and defaults.