China: Increase in trade credit risk on the horizon?

Survey respondents in China expect trade credit risk to increase over the coming months. Find out more about their business challenges going forward.

It is too early to say whether the recent improvement in the outlook for China’s economy will be temporary or long lasting. What is certain is that, despite this unexpected trend inversion, the world's second-largest economy will still be facing many challenges in the near future. China’s success in becoming a more consumption led economy and less dependent on export, especially as global demand weakens, should have a significant impact on whether the recent improvement is long lasting. The uncertainties added by the still unsolved trade conflict with the US, the effects of which ripple across the Asia Pacific region, exacerbate the already strained Chinese business environment. Here insolvencies are expected to further increase over the coming months, despite easier access to financing for businesses. 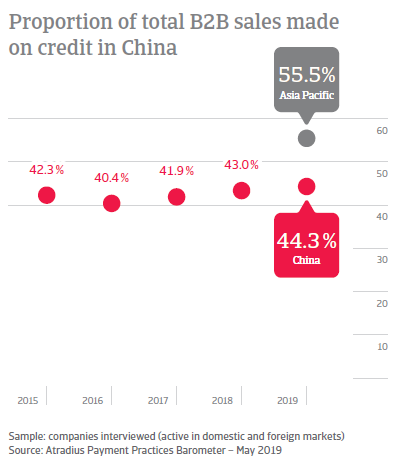 Survey respondents in China have historically shown a greater preference for selling to their B2B customers on a cash basis than on credit terms. Current survey findings confirm this behaviour; however, they also show a trend of increasing use of trade credit in B2B transactions. 55.7% of the total value of Chinese respondents’ B2B sales was on a cash basis (down from 57.0% last year, and 58.1% in 2017) and 44.3% was on credit terms (up from 43.0% one year ago and from 41.9% in 2017). In response to the domestic economic slowdown and the ongoing global trade tensions, Chinese respondents appear to place more emphasis on the use of trade credit to maintain their competitiveness and gain market share, both domestically and abroad. This is a logical reaction to the more challenging business environment.

Despite being more inclined to offer trade credit than in the past, Chinese respondents do not appear similarly inclined to set looser payment terms for their B2B customers. Based on survey findings, most Chinese respondents (85%) requested fast payment of invoices, with terms averaging 26 days (average for the region: 32 days). These are the second shortest in Asia Pacific, after Australia (24 days). The tight payment terms observed in China, which remained almost unchanged over the past year, are at the core of respondents’ strict credit policies. There is clearly recognition of the risks associated with credit sales and the more challenging trade environment. The short terms are used to offset the financial impact of having the cash from higher sales volumes tied up in accounts receivables for an extended period of time.

Payment behaviour in China worsened significantly over the past year 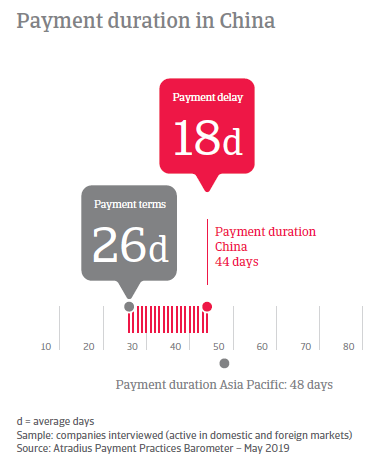 Over the past year, there was a significant increase in the value of overdue and uncollectable invoices in China. This is reflected in an average 36.3% of the total value of B2B invoices issued by survey respondents remaining unpaid at the due date (well above the 29.8% regional average). On average, it takes respondents from China 18 days longer than the invoice due date to turn these overdue invoices into cash (no marked change over the past year). In order to remain financially sound and avoid liquidity issues caused by buyers paying late, most Chinese respondents (45%) reported they were forced to delay payment of invoices to their own suppliers and to take various measures to correct cash flow (40%). 3 in 10 respondents pursued additional financing from external sources to reduce financial pressure on the business. On the more positive side, 1.9% of B2B receivables were written-off as uncollectable (2.1% regional average), the same as one year ago.

Most Chinese respondents (46%) do not expect payment practices of B2B customers to change over the coming months. 22% anticipate an improvement, while 31% expect a worsening in the form of an increase in late payments including in long overdue invoices (more than 90 days overdue). To protect their business against the risk of payment default by their customers, 48% of Chinese respondents will increase their use of credit management software over the next 12 months. 46% will increase the usage of self-insurance, while 45% will perform more regular checks of their buyers’ creditworthiness, and more actively reserve against bad debts. Of note, nearly 30% will begin offering discounts for early settlement of invoices. This within the frame of already short payment terms.

Overview of payment practices in China

Longest average payment terms in the services and ICT/electronics sectors. Shortest in the wholesale/retail/distribution and consumer durables sectors.

Chinese respondents from both the services and the ICT/electronics sectors extended the longest average payment terms (averaging 43 days and 31 days from the invoice date respectively). The shortest average payment terms were extended by respondents in the wholesale/retail/distribution and the consumer durables sectors (averaging 24 days and 22 days respectively).

Trade credit risk is high in the Chinese manufacturing, machines and construction sectors

The value of overdue invoices in the Chinese services sector amounts to 23.3% of the total value of B2B invoices issued by Chinese respondents. This compares to an average of 41.7% in the manufacturing sector and of 29.9% in the wholesale/retail/distribution sector. Both the machines and the construction sectors recorded high of 42.0% of past due invoices, while the chemicals sector a low of 22.9%.

For 2019 we expect real GDP growth to reach 6.2%. This still means a growth slowdown from last year, but the original soft landing scenario is intact

Respondents from SMEs in China extended the longest and those from large enterprises the shortest average payment terms to B2B customers (averaging 28 days and 21 days from the invoice date respectively).  This emphasises the relative leverage that the supplier has in the transaction. 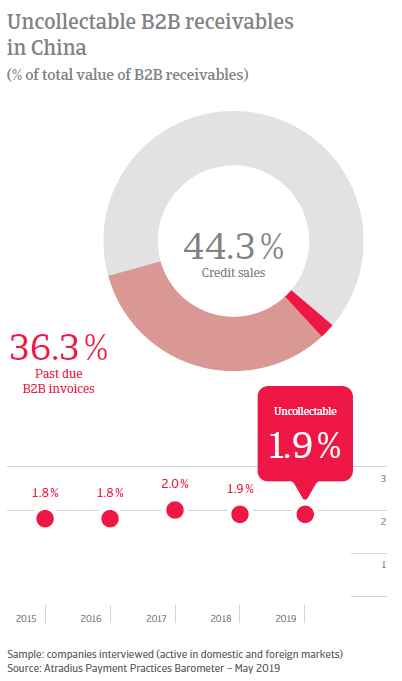 Chinese SMEs took the longest to cash on overdue invoices

SMEs in China recorded the highest proportion (2.1%) of B2B receivables written off as uncollectable. The average for large enterprises is 1.6% and for micro-enterprises 1.4%.

The Chinese retail market remains highly fragmented due to the large population and differences in consumer behaviour and purchasing power across the country.