Economic growth in Denmark is forecast to increase to 2% this year.

The outlook for exports is forecast to worsen due to the expected weakening of Denmark’s main trading partners and ongoing uncertainties surrounding global trade policies.

Danish survey respondents are the most inclined in Western Europe to extend trade credit to their B2B customers. This is primarily used as a mechanism to help build long-term relationships with customers and prospects. Survey respondents transacted 75.5% of B2B sales on credit (up from 61.5% last year),  well above the 60.4% for Western Europe.

Average payment terms recorded in Denmark stand at 27 days from invoicing (up from 23 days last year), below the 34 days average for Western Europe.  Despite being longer than last year, the fairly strict average payment terms granted by respondents in Denmark are a reflection of a payment culture placing emphasis on prompt settlement of invoices, which is seen also in Sweden. 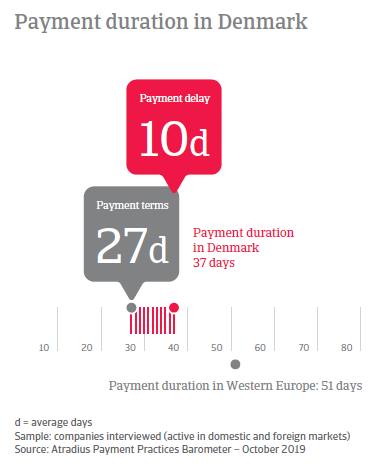 Dunning is the most often used credit management technique in Denmark

Consistent with the extensive use of customer credit along with strict payment terms, survey respondents in Denmark focus on managing their account receivables through a balanced mix of credit management techniques. Among these, dunning (outstanding invoice reminders) appears to be used by far more respondents in Denmark (32%) than in Western Europe (28%).

20.3% of the total value of B2B invoices issued by respondents in Denmark over the past year remained outstanding at the due date. 78.2% of invoices were paid on time (up from 71.7% one year ago). The survey highlights that Danish respondents turn overdue invoices into cash earlier than last year (on average within 37 days from invoicing, down from 39 days). This variation is in line with observations for the region overall, where payment duration decreased on average to 51 days, down from 57 days last year. Consistent with their sharp focus on receivables’ management, far more respondents in Denmark (59%) than in Western Europe (42%) reported no significant impact on business arising from late payments from customers. When it comes to the collection of long-term overdue invoices, Danish survey respondents appear to be more successful than last year. Survey findings highlight that the proportion of write-offs of uncollectable accounts decreased to 1.1% (down from 1.8% last year). This is below the 2.2% average for Western Europe.

Overview of payment practices in Denmark

Based on survey findings in Denmark, the longest payment terms to B2B customers are found in both the construction and ICT/electronics sectors (on average 37 days from invoicing). Average payment terms across the other sectors surveyed in Denmark range from 28 days in the metals sector, to 17 days in the machines sector. At the lowest end of the scale is the consumer durables sector, which is given an average of 13 days to settle invoices.

The credit risk trend in the Danish transport sector deteriorated over the past year. This is due to a sizeable decrease in the proportion of timely payments (76% of invoices paid on time compared to 86% last year).  With an average of 33% of the total value of invoices remaining outstanding at the due date, the construction sector in Denmark has the greatest proportion of late B2B payments. Across the other sectors surveyed in the country, the percentage of overdue invoices ranges from an average of 31% in the consumer durables sector to 13% in the agri-food sector.

The Danish construction sector records the highest proportion of write-offs

The Danish construction sector has the highest proportion of B2B receivables written off as uncollectable. At 1.8% this remains the same as last year and echoes the sector’s poor late payment record.  The consumer durables sector follows suit (1.7% of write offs, although this is down from 2.5% last year). Across the other sectors surveyed in the country, the percentage of receivables written off as uncollectable ranges from an average of 1.4% in the ICT/electronics sector to less than 1% in the agri-food sector.

Micro enterprises are the quickest in collecting past due payments, with an invoice-to-cash turnaround of 25 days from invoicing (stable when compared to last year). B2B customers of Danish SMEs settle invoices within the same time frame as last year. Compared to the same survey period one year ago, the proportion of invoices paid on time has remained stable. Despite this, Danish SMEs turn past due invoices into cash later than last year (on average within 47 days from invoicing, up from 44 last year). This signals lower efficiency in cashing in long-term outstanding receivables. The time it takes Danish large enterprises to cash in past due payments decreased notably, averaging 37 days from invoicing (down from 87 last year).

SMEs record an average of 2% of receivables written off as uncollectable (down from 2.6% last year), and micro enterprises are at less than 1 % (stable compared to one year ago). Danish large enterprises appear to be less successful than last year when it comes to collecting long overdue payments (over 90 days past due). The proportion of B2B receivables written off as uncollectable amounts to 1.9% of the total value of invoices, (up from 1.8% last year). 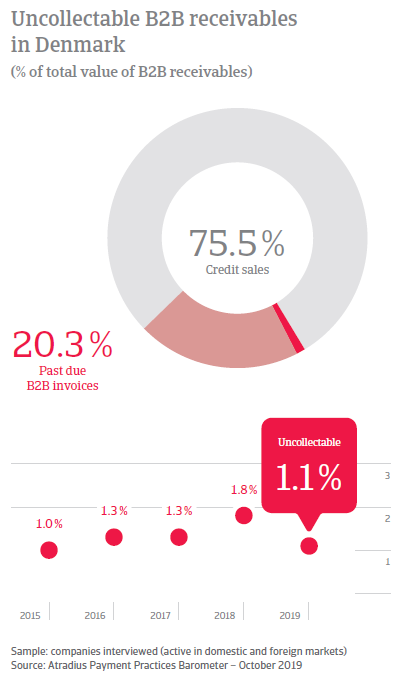 Erik Skovgaard Nielsen, Country Manager for Denmark commented on the report: “The Danish economy is currently enjoying an upturn, after having regained some of its international competitiveness due to structural reforms that addressed the issue of high labour costs. However, although robust domestic demand is sustaining growth, exports remain susceptible to lower Eurozone demand, especially from Germany. Additionally, looming uncertainty surrounding the future relations between the UK and the EU could have a negative impact on Danish foreign trade relations, as the United Kingdom is Denmark’s third largest export market. As to insolvencies, we expect them to level off this year, after the substantial increase recorded last year.

Against this backdrop, survey findings in Denmark reveal that businesses use trade credit widely with their B2B customers. However, they support these liberal trade policies with tight payment terms, which are expression of a culture that places emphasis on prompt payment. Businesses are also aware that the global trade environment has deteriorated and this threatens safe business growth.

Within this context, it is important for businesses in Denmark to sharpen their focus on credit management to minimise the impact of  payment defaults and to seize growth opportunities.“

The Danish economy has regained some of its international competitiveness due to structural reforms that addressed the issue of high labour costs.

The insolvency level is high compared to other industries, and after increasing in 2018 business failures are expected rise further in H1 of 2019.

A potential downside risk to the economic performance could be the high household debt in case of sharp house price decreases and interest rate increases.